I spent yesterday and today moving things in and putting them away. It's pretty much done! The cabover bed is made. 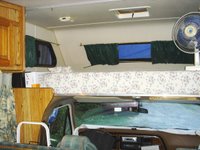 The rear bed is made. 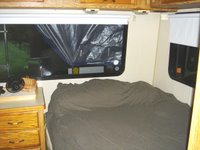 The crafts and music stuff is in place.

I still have a couple of empty cabinets! There is also stuff I have no place to put. Like the desk box I had made to fit in the travel trailer 2 RVs ago. Oh, well. In the house, I guess. That blob of blue under the keyboard is a 1/2 finished afghan. Soon! Or maybe not - it's WAY too hot to crochet right now.

No can do. There's still a matter of a ceiling leak and I have to take the Escaper on a work trip Sunday! 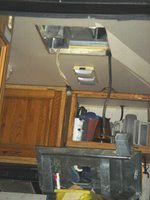 During the torrential rain, it dripped from the a/c, and it followed the a/c electric cord into the kitchen cabinet. We took apart the roof air conditioner to see where the leak might be coming from. Couldn't find any water damage in there!

We went up on the roof and took the cover off. 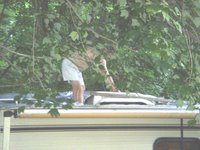 While that was most uninformative, we did find roof damage between the a/c and the satellite receiver. Now I would be wishing I'd walked around on the roof further when I first looked at it, except it is repairable and I really like this motorhome. So I won't kick myself in the rear too much. I am, however, continually grateful that Danny is Danny - willing and able to fix things - and enjoys it - and does it with such a calm, matter-of-fact attitude. No flaring ego, no temper tantrums. He's pretty darn wonderful.
This is ironically aggravating: I rarely run the a/c because I usually boondock, and I sure as heck don't watch TV! I'd be quite happy with a roof with neither of these leak sources on it. 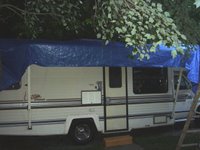 Suffice it to say, we'll be patching and caulking and smearing goop up on the roof tomorrow night. And, since tomorrow's the Fourth of July and we can't buy supplies, Wednesday night also. For tonight, though, we're done. The tarp is back in place and it's time to knock off for the night.
Posted by Gypsy Jane at 8:59 PM