Remember that blog where I moved the music stuff out of the cabinet in the bedroom and had an EMPTY CABINET? I did finally get a chance to go through the beadwork supplies that had been crammed into the same cabinet on the other side. 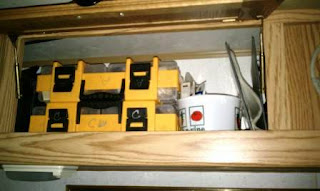 Now it's neat, orderly, and safe to open. 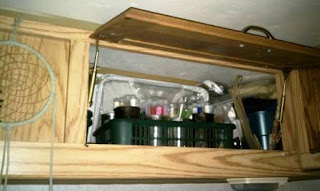 I was able to move about half the beadwork supplies into the other cabinet, so now they're actually usable.

Then next project involved yet another sort-through of clothing. I wanted another empty cabinet. More to the point, I wanted stuff I had to get at every day to not be in the hard-to-reach cabinets over the bed. 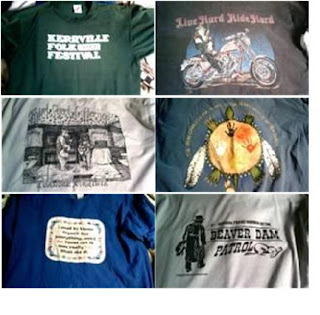 While I was at it, I took pictures of my tee shirts. It's a cyberquilt. Eventually, they'll wear out, but I'll still have them. 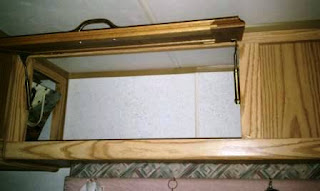 Now I have the empty cabinet I was hoping for. The other over-bed cabinet holds winter clothes. Everything I actually wear now is reachable. I'm hoping by winter, the winter clothes will be too big and need to be given away. Of course, that never happens to wonderful baggy sweaters, does it?
Posted by Gypsy Jane at 6:52 PM 1 comment:

The other day M. brought me a baby squirrel, with an injured finger. He said 'you have to keep it warm or it'll die,' and took off. Actually he did tell me some of how he came to have it, but I didn't remember all he said. I was focused on how to take care of the first squirrel I'd been closer to than 6 feet. 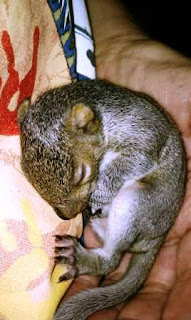 Some ladies on a Yahoo group I recently joined, had been talking about A's squirrel so the first thing I did, with Doodle in one hand and typing with the other, was go on the group and ask for help. I'd never knowingly met anyone who had a squirrel before, so I was really glad I'd read their posts. A. called me and told me some stuff and I looked on line... I put a hot water bottle and towel and Doodle in a box and ran off to CVS for Pedialyte and a syringe, and WalMart for kitten milk, Fed the little guy a few times with Pedialyte and spent the time between feedings looking online. It was 10:00 pm by the time I found the wildlife rehabilitation lady in the next county, but she was up and took my call. She assured me the kitten milk would be fine and agreed to meet me at 11 the next day at her work. So I went to feeding him the formula, diluted more than you would for a kitten. He was so adorable, drinking from the syringe, holding it like a baby holds a bottle. I wish I could have gotten a picture, but both my hands were quite occupied. And at 11, I was at Julie's with a basket of squirrel. 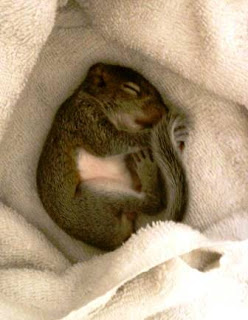 I hadn't had much success with helping him to potty (they need the equivalent of the licking/grooming their moms would do) but the rehab lady did fine, so I believe Doodle will be OK. She promised pictures as he grows. So where did M get an injured squirrel? He works at a lumber place. Loggers cut trees, load the logs on trucks, and bring them there. M. cut into one of the logs and found Doodle in there. With his saw! Which cut one of Doodle's little fingers. Poor little guy, with his eyes not even open yet and no squirrel family around, scrambling to get away! So M. scooped him up and brought him to me. He says there have been quite a few squirrels - and snakes, too - in the logs they bring in to saw into lumber. He's tried to save them. Some didn't make it, some did. He was really happy to hear that Doodle was one who did. It turns out that not only my new friends online have raised squirrels, but quite a number of other people I know had also done so. Note: they aren't pets, they do chew, and if at all possible rescued squirrels need to be returned to their free and wild life. Kinda like RV'ers. I don't do well in captivity either.
Posted by Gypsy Jane at 10:05 PM 3 comments:

This morning I found the Beavers had put a bit of extra effort into stopping the drains last night. Usually at least some water gets through, but this morning nothing at all was getting through the pipe. Of course, I fixed that in short order. 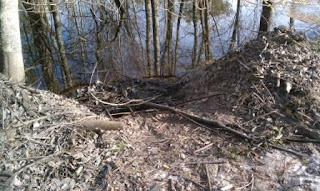 The owners of the campground at which I'm hosting came in today for a brief visit. They are very cool people and it was great to see them. They brought me food from the family reunion they'd just attended, and also presented me with this tee shirt. I will wear it with pride. 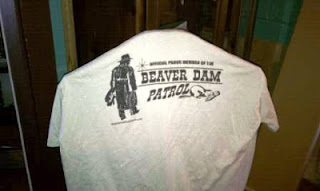 If you'd like to see beavers in action, this is a great little film.
Posted by Gypsy Jane at 8:25 PM No comments:

I am still at Stagger Lee Music Park, and will be for a while. I have a number of personal goals I want to accomplish while I'm here, and some things for the Park also. And I have not caught up with myself yet. For a while I was saying "I need a year off with pay to catch up with myself!" And then I started saying "I need two years off with pay to catch up with myself!" And yet I thought 2 months would be enough??? NOT. One of the personal goals is to eliminate all the moss this rolling stone has gathered. OK, I'll settle for most of it. A 32 foot camper inhabited by one single female ought not to be this cluttered. To that end, I have gone through the entire rig (I still need to do the bays) and pulled out the obvious stuff that can go. Now, the question is what to do with it. I will not be adding to the landfill. 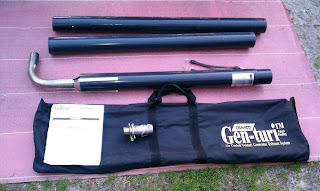 A couple of days ago I found a home for this Gen-Turi that was taking up several cubic feet in my storage bays. I can't stand the noise of the big generator long enough to make it worthwhile hooking it up, so when someone said they would love to have one I hopped right on that and it's in the truck ready to ship on my next trip to town. 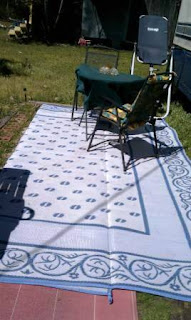 Like I said, though - nature abhors a vacuum. One of our campers pulled out today and left this lovely, just the pattern I've been wanting, patio rug. I can't tell you how many times I've resisted buying one, even on sale, because where would I stow it? Those square feet in the bay, recently vacated by the Gen-Turi, sure didn't stay unallocated for long! So thank you, Cyn & Michelle. Michelle also told me of a flea market where she successfully unloads her extras a couple of times a year - and oh gee, it is on the way to my younger daughter's house. So I guess whenever I do head north, I'll make a stop there and try to convert some moss into a different sort of green.
Posted by Gypsy Jane at 4:41 PM 2 comments:

During the time the campground was filled up with people working the local nuke plant shutdown, it rained. It rained a lot - enough that schools were closed in the area due to flooding. It was definitely not normal weather for here, and it presented "interesting times". Part of the land here at the campground is wetlands preserve. It's inhabited by at least one alligator, fish, frogs, turtles, and beavers. The beavers thought this extra rain was great. The humans were not so amused. Remember the picture I posted of the pond with the canoe? Here it is again. Except I'd moved the canoe to higher ground. 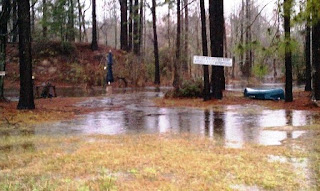 The road to the campground crosses water. When all that rain hit, the road got muddy and the swamp got deep. I was concerned that it would wash out the road but it didn't. I spent a lot of time making sure the culverts under the road were clear. 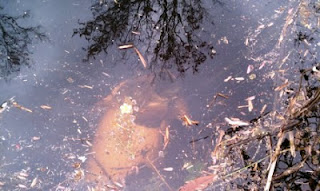 On one of my culvert inspections, I found this turtle held fast against the mouth of the pipe by the suction of the rushing water. I got him unstuck, and found another one at the other culvert. When I freed that one, he woooshed through the pipe and I found him again, on the other side of the road, stuck upside down on debris. Flipped him over and he was on his way. 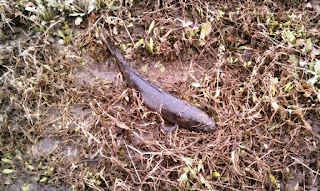 While the road didn't wash out, it was under water for a little while. When the waters receded, I found this fish still alive on the sand. He got real excited when I picked him up, but I didn't drop him despite his best efforts at escaping, so he was happily headed downstream last time I saw him. 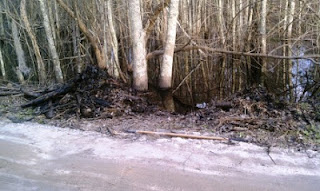 Every morning I clear debris from the culverts, and every night the beavers put it back. They particularly like to try to block this one culvert, so the mounds of debris are piling up quite nicely. 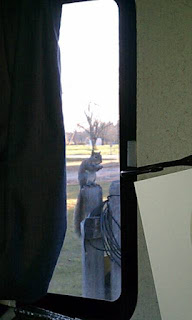 It's been a while since the mini-monsoon, and things are back to normal.
Posted by Gypsy Jane at 10:53 PM 2 comments: