National Museum of the Marine Corps

Last Sunday after I broke camp, I went to the National Museum of the Marine Corps at Quantico VA.
I've been to museums, and museums - but this one is Really Good. The following pictures do not do it justice, but I'll try to give you an idea. 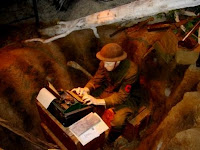 USMC history goes back to the Revolution. Here, colonial era Marines tend to the rigging overhead. 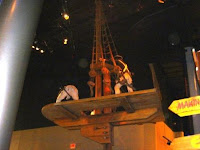 In the Making of a Marine section, you learn about Boot Camp and are screamed at by DI's - drill instructors as they begin to train you to withstand the stress of combat.
Here, a recruit is on the rappel tower. 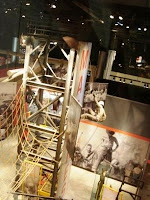 A look at a Marine's personal articles. 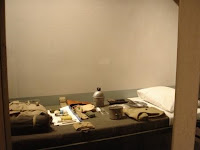 A female Marine in uniform. 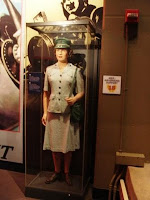 Civilians learn of Pearl Harbor on their radio. Ignore the flat screen monitors - those are for us. 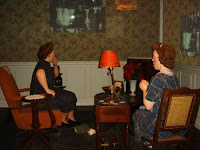 A Marine in Viet Nam - I believe the enemy is hiding under there. 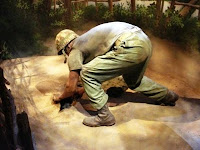 Marines in town warfare. Note the Marine comforting the child near the house. 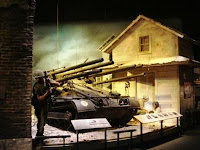 Many of the displays were immersion experiences. I was immersed, so you don't get many pictures of those. Here, we are landing out of the plane and right into combat. 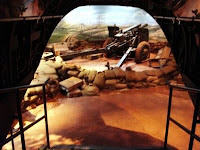 War all around. Dead bodies. 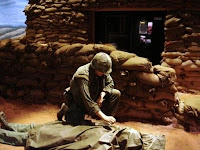 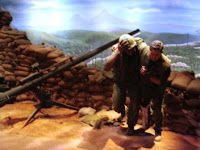 Back in a main area - Marines at work. 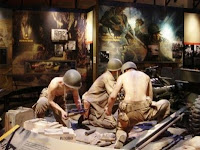 I have much increased appreciation for what you Marines do. I salute you. 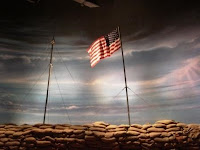 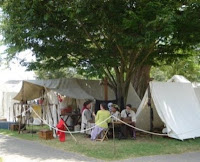 July 10th - OK, so I'm slow updating the blog - I went to the Blackbeard Festival at Hampton Va. It LOOKS like a Rendevous (except for being in town) but it's a Pirate Festival. With tall ships and all.

It'd be a lot of fun anyway, but my main motivation for attending was to hear House of Cadarn,

which is my daughter and her singing partner.

I parked my motor home and walked toward the event. It was early, and the first open vendor I ran into was a clothing designer. She had a booth full of fun hot-weather clothing and some wonderful oriental-style silk outfits, and great prices. Carol only does festivals and doesn't have a web site or I would post a link. I will certainly be watching for her at future festivals. I bought a neat black silk outfit with purple flowers. She told me she'd sold a similar one the day before to someone who was at the festival and going to do an oriental pirate impression. (One of the first known female pirates was Chinese.) So off I went with my plunder tucked in a bag, to meet up w 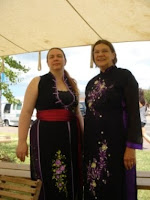 My daughter, the Chinese Pirate - who had bought HER outfit the day before. Needless to say, we had to go back to Carol's booth to share our amusement.


They sang, I enjoyed, we explored the festival, ate yummy food, explored some more... 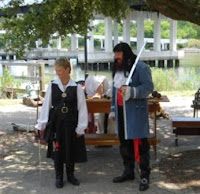 Of course, we saw lots of Pirates.

And surprised a few friends from Rendezvous... Time travelers get around. 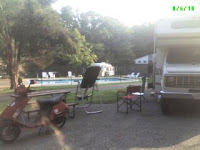 Sure beats a supermarket parking lot! Spending the weekend in this lovely campground Right By The Pool.

I arrived, leveled, plugged in, and jumped in the pool. Then the rest of the chores.

The odd contraption in the middle of the picture is my inversion table. Since I can't carry a chiropractor with me on the road (darn it!) I carry this instead. It really helps.
Posted by Gypsy Jane at 6:16 PM 1 comment: