Some things got accomplished this weekend. I treated myself to a campground, made a to-do list, and started checking things off. 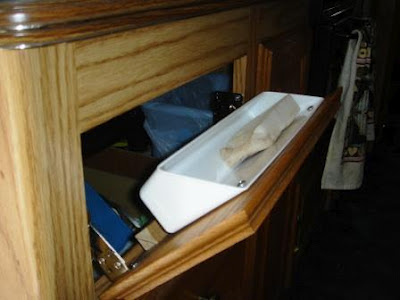 The false drawer in front of my sink used to fall off every so often. It won't happen any more - it is now a drop-down door with a tray for cleaning tools behind it. By Ref-A-Shelf out of Lowe's. 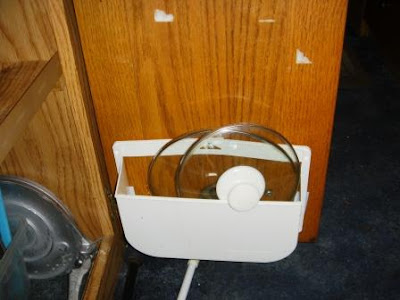 I'd had the lid holder all along - it came with the motorhome. But it was on the pantry door, so I'd removed it and although lids were in it, it was just sitting inside this cabinet. I finally had a spare moment and it's now on the inside of the door where it belongs. 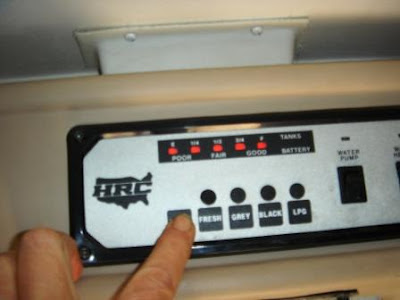 The big accomplishment of the weekend: after a couple of weeks of frustrating troubleshooting, my coach batteries are charging again. I'm not sure exactly why - it might have been the battery terminals or it might have been something interfering with the cut-off switch that got fixed when I attempted unsuccessfully to remove it - but it was not bad batteries, a bad converter-charger, or a few other things that were checked. (Thank you Iche for helping me with that.)
It is SO nice to see all 5 lights come on when I press that button!

Other things accomplished this weekend had to do with laundry (you don't want to see pictures), cleaning, knitting, and music. 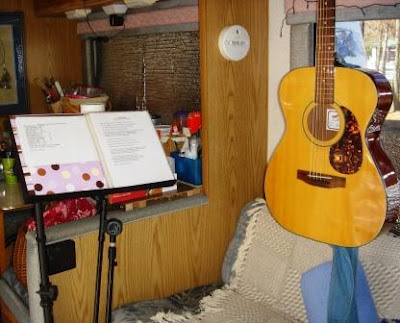 This is my music stand and guitar, ready for use, when I'm parked. When I'm on the move, the guitar is safely in my case, as you've seen in previous posts. 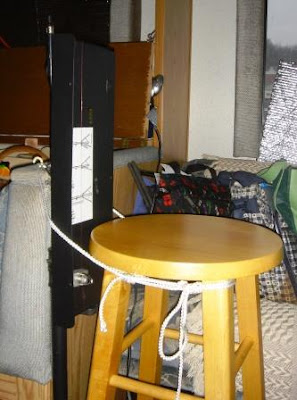 The music stand used to live in its case too, but stuff that's too hard to get at doesn't get used so I've fixed that. My stand is very cool - it's a heavy-duty stand that folds down a lot like a good guitar or mic stand. Even the music holder itself folds in half.

The stand is secured to the back of the dinette seat with a cup hook and tiny bungee cord and can live there permanently. With the music tray folded down, it rides nicely, and a rope holds the stool in place next to it. (The mic stand just kind of sits there - the stool doesn't let it escape.) 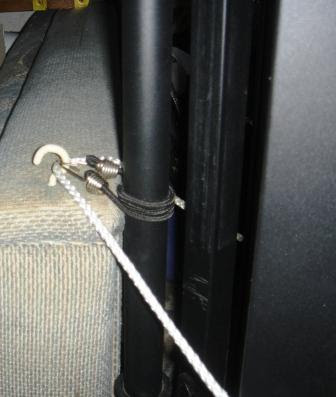 While I'm thinking about securing things for travel - I have an Ott-Lite floor lamp. It shines natural daylight on beadwork and whatever I'm reading. It also takes very expensive bulbs and it would really be bad for it to tip over. 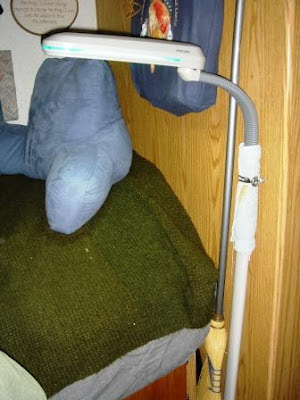 Here it is, secured to the bedroom wall. I put an eye bolt through the wall, cut the excess off with my Dremel, wrapped the lamp with a washcloth to protect it and bungee'd it to the eyebolt. That lamp's not going anywhere I don't want it to. 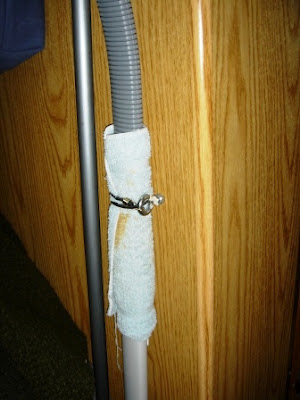 Now THIS - I thought I'd written about it, and taken more pictures - NOT. A few months ago, I stopped at a light that I probably should have run. I heard things moving in back, and figured I'd have to do some cleaning when I reached my jobsite. As I drove on, though, I heard a crashing noise and pulled over to investigate. The first thing I noticed is that my knife block had flown from the back of the dinette to the couch just behind the drivers seat. That was a scary thought.
Then I saw the source of the crash: my fridge door had come off its hinges (one'd broken) and was lying on the door, with the contents strewn around.
I said bad words about plastic hinges and carpeted kitchens, picked up the debris and drove to work. I was able to duct tape the hinge and replace the door, but that's not a permanent solution.
Next chance I got, I removed the door, covered the opening with a down comforter to keep the cold in, and epoxied the hinges back together. So far it's working fine. 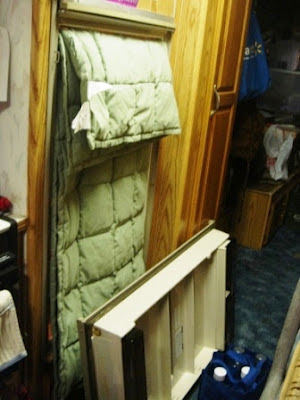 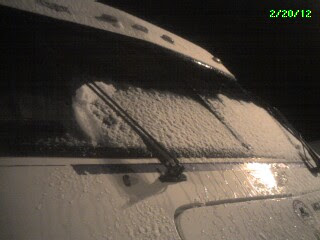 Remind me why i'm not in South Texas?
Posted by Gypsy Jane at 5:43 AM 1 comment: