When I was still living in the Escaper, I bought a wonderfully comfy air bed from Bed Bath & Beyond. It has a built in electric pump and is easy to adjust - sort of like a Sleep-Number Bed without the price tag. It's a twin size, and I bought it thinking I would be able to move it into the Holiday Rambler when it finally got road-worthy.
Not so much. 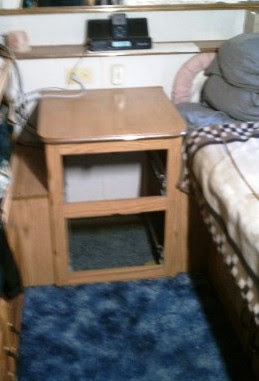 The beds in the Rambler are a custom size, about 8 inches narrower than standard twin. Sheets don't fit. Extra pillows get in the way. When I put the air bed in place and inflated it, it not only hung over the edge of the bed, it overlapped the built-in bed stand.
Fast forward a year or so. I'm parked at my friends' (Thom and Kacee) in Tool Heaven. So I asked Thom how hard would it be to move the bed stand over to the left. He said it would be pretty easy and promptly volunteered to do it. OK - pretty easy for him.

He's got cool stuff like off-set ratchets. Good thing, because the way motorhome interiors are put together, screws are not always reachable in anything like a normal manner. 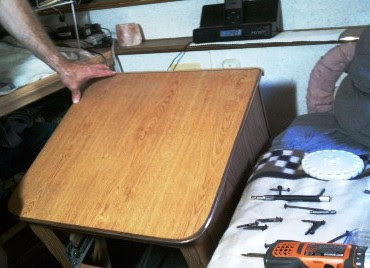 After a bit of contortionism and suitable application of cool tools, the stand and the left spacer were removed. 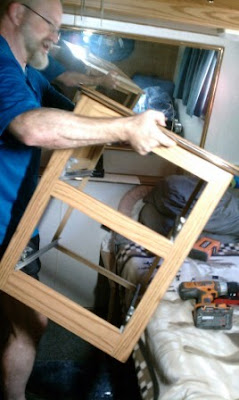 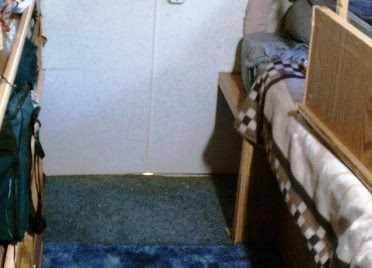 A bit of adjustment was required to make everything fit back in properly. 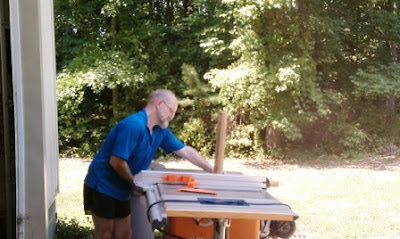 The left spacer was joined to the right spacer. 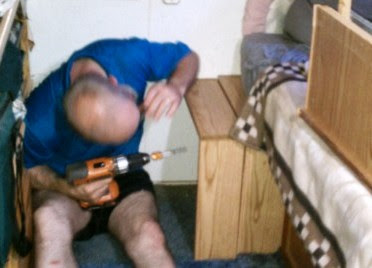 The stand was installed to the left of the spacers, right up next to the musical instruments' bed. 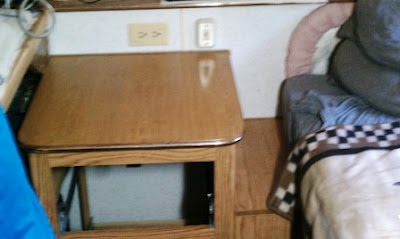 Then Thom built an extension for the bed platform. 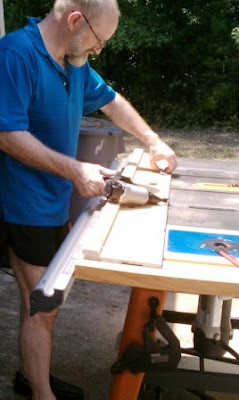 And voila! The roomier, more comfortable air mattress is installed. 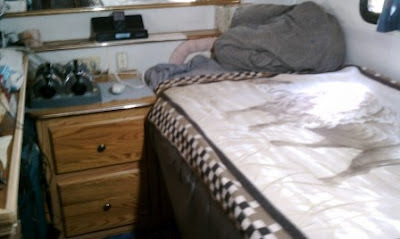 Thom, I thank you, my back thanks you, zzzzzzzzz.
Posted by Gypsy Jane at 11:39 AM 2 comments:

OK, my intentions were to take care of business here, staying in my usual spot at Izaac Walton, then head south to join my kids for the Fourth of July. Friday evening the Weather Channel sent an alert to my phone warning of severe thunderstorms. I took heed and furled my awning, then went to bed. When I woke to the sound of high winds, I thought it was morning - actually it wasn't but around 9 pm. There was a lot of wind. I got a text from my friend Sue, about 80 miles north, that it was storming there too. A quick check of Facebook let me know that it was storming lots of places. I heard a clunk on the camper - something'd hit it. Later I heard another one. Later on, I heard and felt a major clunk. Of course it was dark. Very dark - the park had lost power. Somewhere along the line, I got up and dressed again. If I was going to be picked up and hurled to OZ, I didn't want to arrive in my nightgown. I spent some time in the hallway, reading the internet on my phone, figuring it had the most vertical wall support, just in case. 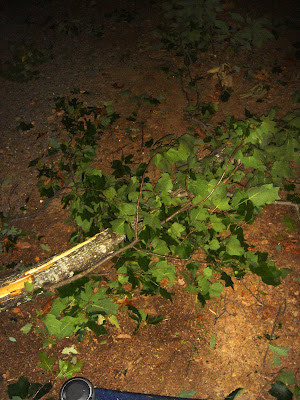 Before midnight, it got quiet. I decided to take a look outside. When I opened the door, 2 things happened: I saw a large limb lying on the ground in front of the door, and I got swarmed by all sorts of little (and big) bugs. See, when the park lost power, the pole light 2 campsites over went out. All the bugs had no light to attract them except the one in my kitchen, so they ran me over on their way in to have a party at my place. (Never again will I complain about that pole light!) 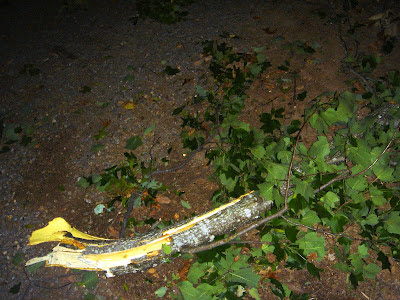 OK, limb in the yard,

limb on the roof, 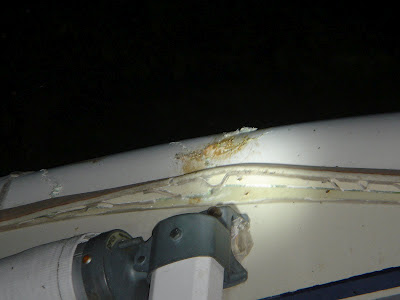 some visible-in-the-dark damage... I called the insurance company and filed a claim. In the morning, I went out for a better look. 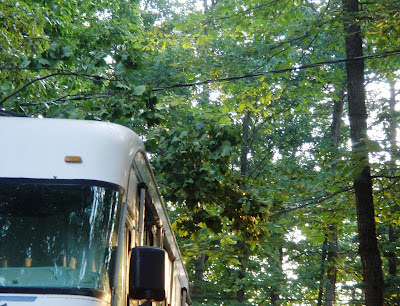 Small limb on the roof. 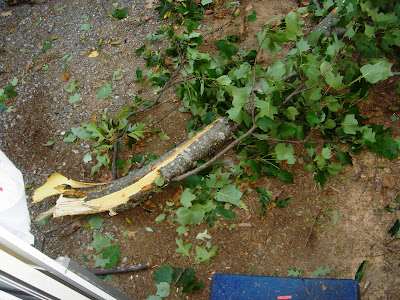 Big limb in the front yard. 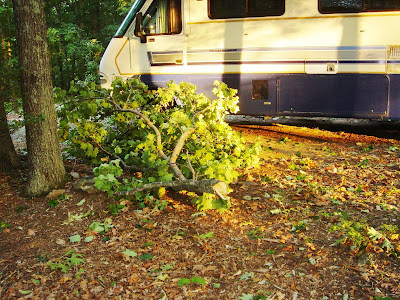 Big limb in the back yard. 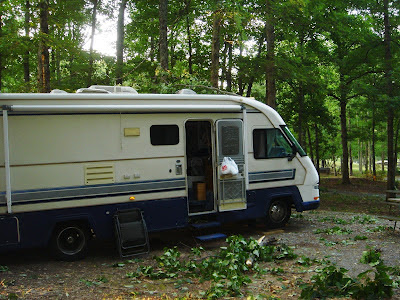 Then I closed the door and saw what it had hidden while open: the door to my propane compartment was pretty mangled. 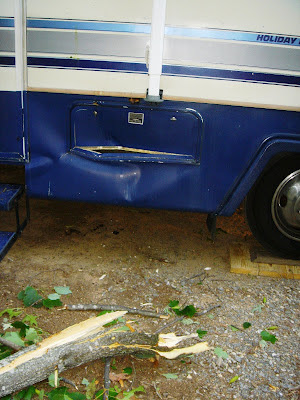 What happened was the limb had fallen from the top of a nearby poplar. The butt had hit the propane compartment door as it slammed up against the side of the motorhome. It snapped at the roofline and the top of the limb somersaulted over the rig and landed on the ground on the other side with its butt away from the rig. 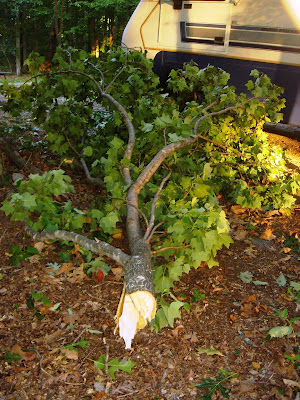 I don't know whether the limb on the roof, which slid under the powerline, is part of the same or a separate event. I do know that if I'd left the awning open, it would have been mangled thoroughly. As it is, I have serious damage to the compartment door, damage to the roof corner, and need to have the roof itself thoroughly inspected. Elsewhere in the park, several trees went down. One was an oak, at least 18" in diameter, which stood in the midst of several campers in the more crowded area of the park. It did not hit any campers, but brought down a power line and landed where a car had been moved from 15 minutes earlier. Elsewhere in the world, one of my friends has a tree through her kitchen roof. I write this while waiting for the insurance adjuster to call, and for the internet to come back up... Hope everyone's ok out there.
Posted by Gypsy Jane at 12:58 PM 3 comments: