Back when I first moved into the Holiday Rambler, I made some modifications. One of these was a bifold door which became a countertop across the back of my dinette. Half the door held my appliances and things that are in constant use, and the other half flipped down to use as counter space and up to keep things in place while driving. 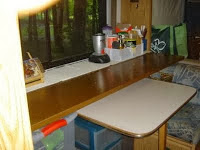 That was in the Spring of 2011. Since then, although that has been very useful, it was slightly aggravating. The counter, when down, did not allow eating at the table, but did not come all the way to the aisle for use as a prep surface. When up, there was room to sit and eat, but it was rather claustrophobic. Instead of appliances and window, there was this brown wall.

Finally, I'd had enough. Parked for the holidays at my daughter's inlaws' place, where there are tools, it seemd a good time to take care of the issues. I took a trip to Lowes and got a discontinued $35 board for $10 and an L-shaped aluminum piece and some 1x1 for supports. This is my $24 kitchen remodel: 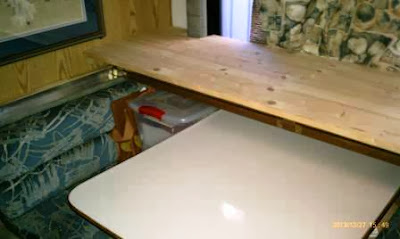 The board became a new countertop. The existing bifold doors fold up and stow beneath it. 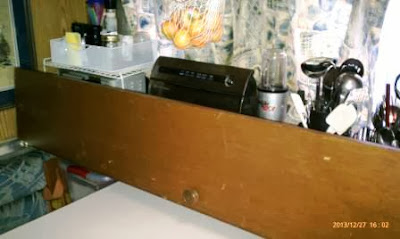 I can still flip the door up for travel. 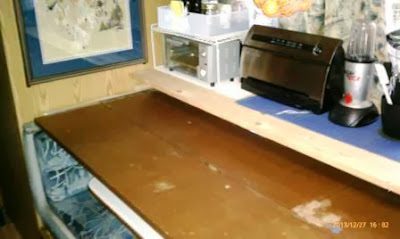 I can pull it out all the way, unfolding it to be a truly useful surface. I will probably do something with paint or contact paper in the spring, but for now it's useable as is. 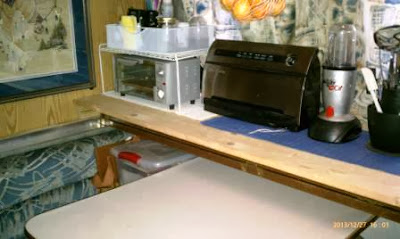 Folded over, the bifold door slides under the counter and there is plenty of room for 2 people to sit at table.