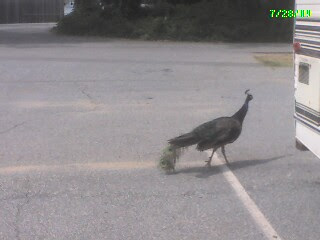 I had a visitor today.
Posted by Gypsy Jane at 4:16 PM No comments: 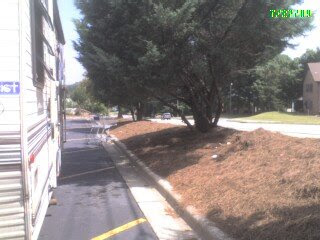 At work again of course. In most of the parking lot, I'd need railroad jacks to get level, but around the side I found a possible spot - and a shade tree. The perennial search for level shady ground!
Posted by Gypsy Jane at 11:44 AM No comments: 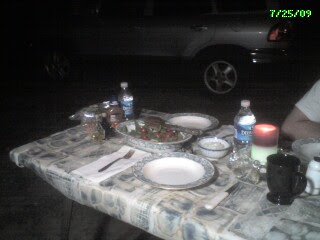 My elder daugter & her SO came out to Izaak Walton to help me celebrate my birthday, so I got out the good china. Seriously: it was my great-grandmother's. I have Corelle to rattle around for every day use, but special occasions call for the good stuff. In preparation for their arrival I rearranged the cabinets so the good china storage bins will be more accessable and got rid of about a cabinet full of miscellaneous kitchen stuff I really don't ever use. We ate, we shot, we swam, and a good time was had by all.
Posted by Gypsy Jane at 8:09 AM No comments: 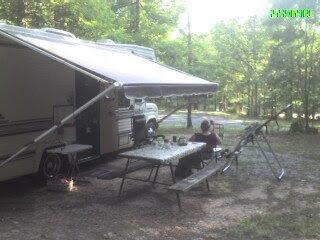 Instead of posting yesterday, I drove home from NC and took the motorhome to the shop. I got lucky: they had a used spring to fit my awning! So it is once again functional. I really missed it after the spring broke last month.
So I'm at Izaak Walton in my favorite campsite, about to feed a friend some dinner.
Posted by Gypsy Jane at 9:22 PM No comments: 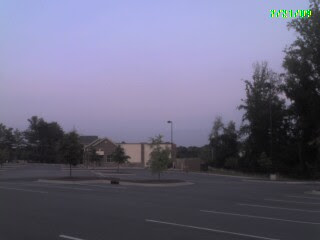 At work. So the yard for today is the yard for the week. Obviously, some job-site parking is better than other job-site parking. This one, in a still - mostly - unrented newish shopping plaza, gets points for peacefulness and for trees. And I found the one level parking space in the whole lot. Life is good.
Posted by Gypsy Jane at 8:39 PM No comments: 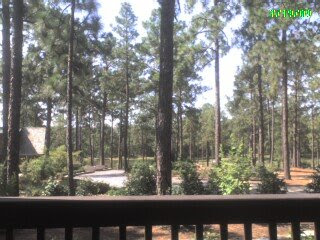 Waiting for laundry to dry on the back porch of the laundry room / bathhouse, with sun, shade, rocking chairs. How come the last three weekends, when I had free laundry at my kid's house, I only had one load - this weekend I have THREE. I NEVER have THREE loads!?!
Having just finished a book - if you get a chance, read Name of the Wind - I brought some magazines down. Then again, I might just sit & listen to the birds.
Posted by Gypsy Jane at 10:43 AM No comments:

No, I didn't move the motorhome. This is a view from the canoe. This park has 3 paddle boats and a canoe available for campers to use on the pond. Not one to miss an opportunity to go canoeing, I made a beeline for the water right after lunch. 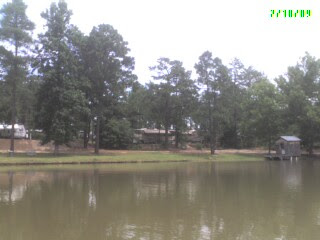 If you always stay in your comfort zone, it shrinks and strangles you like a boa constrictor. So, although I am not now, nor have I ever been, a dancer, I attended a dancing class this afternoon and now have a basic understanding of the Electric Slide, the Hustle, and the Macarena, and a screaming sciatic nerve. Time to hang like a bat!

Posted by Gypsy Jane at 4:10 PM No comments: 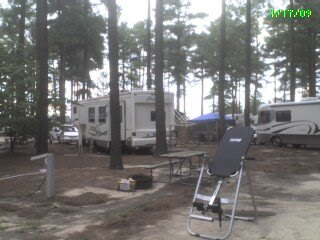 Sycamore Lodge, in NC.
I was SO glad to see the pool, after driving up from Santee for 3 hours. This is a private membership campground. I'm here this weekend to take their tour.
The internet access is in the Members' Lodge which is a turn of the (previous) century log lodge, made of huge logs harvested from the land the campground is on. It is large, well-preserved, well-appointed, and comfortable. There's the pool, and a jacuzzi, and a lake complete with boats... A pavillion for entertainment, a game room, another - multi-purpose room? - horseshoes, miniature golf - a doggie park - a playground for kids.
It's a family oriented campground, with lots of kids about and so far they all seem happy and well-behaved.
Life is good.

Oh, yes - the strange contraption in my yard is an INVERSION TABLE. I hang upside down and let gravity be my portable chiropractor. It's great. It really helps. Which is why I allow it to take up space in the motorhome. I want my next motorhome to be a toy hauler so I have room to set it up inside.
Posted by Gypsy Jane at 7:02 PM No comments:


Camped at the Cypress View campground at Santee State Park, during one deluge of a storm. The white spots in the picture are not poor photography, they are raindrops. The thunder was constant and the wind was a'whipping. But it didn't last very long. Water was several inches deep but drained away quickly.
Posted by Gypsy Jane at 6:00 PM No comments: 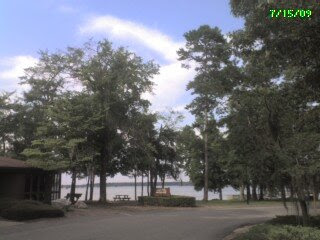 Same park, different spot.
This is over by the park office, which has WiFi. Nearby are the cabins (which are octagonal), boat access, store, playground. This part of the park has the Cypress View campground also. There is another campground in the other part of the park, where 7/14's picture was taken.
Posted by Gypsy Jane at 5:33 PM No comments: 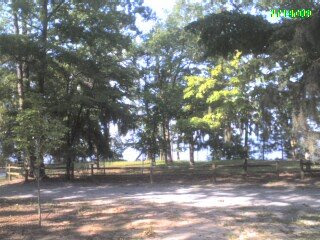 This is my back yard today. Santee State Park, Santee, SC.
Cool breeze off Lake Marion. Picnic tables overlooking the lake. Shade. And a different yard tomorrow. Wonder why I love RVing?
Posted by Gypsy Jane at 5:42 PM No comments:

I'm so glad I bought a generator.

I've never had a generator before. This spring - OK, it was still winter - I bought a Honda portable generator. Right now I'm Really Really glad I did. It's been kind of nice to be able to have AC power during the week when I want, use the computer more, not worry about the fans wearing down the batteries, that sort of thing. Definitely a luxury item, though, as I've been doing fine without one since 1995.
Then I had some work done on the engine. The kind of work that involved removing the motor. Apparently, when everything was put back together, someone missed the extra wire coming from the alternator to charge the house system. Not that I blame them. My mechanic's not an RV'er. Most people are TOTALLY unfamiliar with such things as coach batteries, battery isolators, converter boxes.

I have 3 good house batteries, so I can run unplugged for a pretty long time. Using the generator occasionally and plugging in on weekends, I did not even notice until last week that my batteries didn't seem to be holding up so well. But I spent 2 weekends in a row visiting my daughter and not plugged in. The second weekend, when I parked, my lights seemed dimmer. My battery gage read Fair, not Good as I would have expected. I'd just driven quite a ways. What's going on?

In the morning I used the generator to charge the batteries directly. After the weekend, I drove back to Greensboro for work. Soon, the gage was reading Poor. I ran the generator whenever I was home. Wednesday I went to AutoZone and removed my batteries for charging and checking. They were fine. They should be, they were less than a year old. I then checked what I should have checked earlier - hindsight is great, yes? I checked the gage with the engine running. Normally it would show charging. It didn't.

OK, now I know what the problem is, but it will be a while before I am back where the mechanic is. Having someone else fix it at $80/hour or so? I don't think so. I'll wait. But I'm really glad I had a generator, and I'll be using it a lot in the next few weeks.
Posted by Gypsy Jane at 4:40 PM No comments: