Getting Ready to go AdVANturing.

If it is lovely to spend the winter in a relatively warm place, catching up with oneself, it is also lovely to be able to go adventuring - and time traveling. For this, I want something smaller than the motorhome. Smaller than the Escaper, even - and it has to carry the 18th Century stuff too.
My van has done this duty for years now, and well. But this year, I want to be able to camp in the van between events, and take it to the woods too.... Some mods are in order.
First, empty the van. 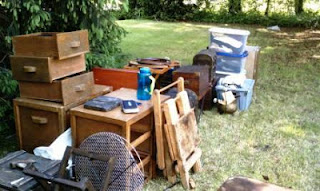 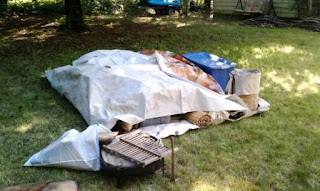 I have a full camp - I don't need anything else to be able to camp with the stuff that lives in the van already. I just need to rearrange it, and maybe weed some of it out.
Also, the carpet on the floor has been wet and is atrocious. The next order of business, then, is to remove that and the bench seat. 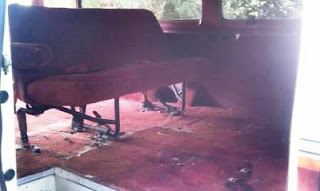 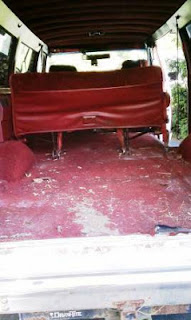 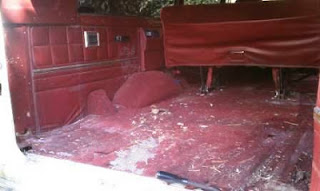 They didn't want to come out; they'd been there since 1989, after all.
I recruited help. Help with power tools. 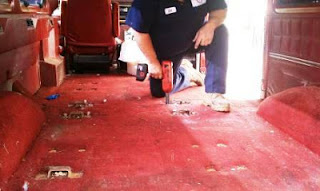 That done, the carpet came out.

Except for the bits under the door trim.

I'm still working on that. And deciding what to replace this - heat shielding? - stuff with, if anything. 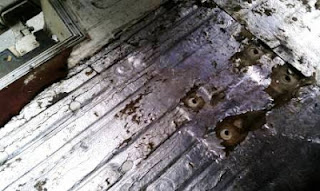 In the Dodge van I used to have, I put a remnant carpet in it, with no other special anything, and it was fine.
Then my work came to a screeching halt. The steering on this van has always been a little strange, and with it empty I figured it was the best time to put it in the shop and have that fixed. So now my stuff's in the yard under tarps and my van is in the shop waiting for the ordered king pins to show up.
Meanwhile I have floor stuff to put in and roof racks to put on. I ordered a second pair of roof racks to match the ones I have, so that even my short wall-tent poles will go on the roof.
The plan is to load everything that will only be used AT Rendezvous in the front section, with a rug under them for slide-ability, with tent camp in front of them at the side door. In the back will be the road camp, my rolling bedroom/kitchen/loo. I have wood-floor looking rubber-like foam tiles for that part, and they have already arrived.
I was going to put that throughout the van, until I realized that the stuff in the front part will be sitting there squishing them year round, plus they might be hard to slide stuff across. I also realized that this is definitely the stuff I want in the motor home, to replace the ancient carpet. Who thought carpet should be in vehicles anyway??? Bad idea!