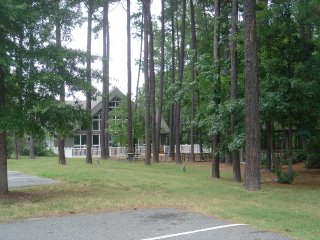 What's Cool About This Place?, part 2
Pictures are uploaded! I did a lot of things so I don't know what worked, but they are up!

2 weeks ago work took me - and my new Palm Treo cellphone - to Hampton & Newport News VA. This was rather wierd: My daughters used to live there and moved away just last year so it felt really really strange to be there and not visit them. Of course I've been there a lot - but always DID visit the kids so I wasn't exploring.


This time, I found - mere miles from their old house - the Sandy Bottom Nature Park. http://www.hampton.gov/sandybottom/ I spent 2 afternoons enjoying the green shade and waterside trails.

Sandy Bottom is reclaimed land. It used to be a place where sand was mined for building roads and garbage was just dumped. Now it's 456 acres of nature in the middle of the Newport News/Hampton traffic. 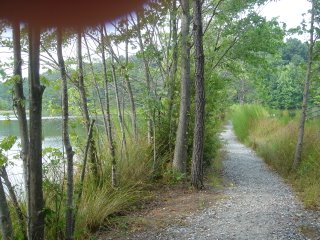 There's a nature center and gift shop. There are twin lakes with a trail running between. 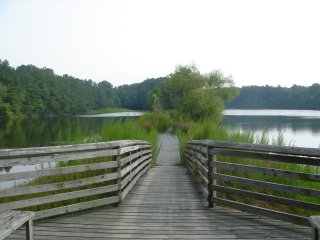 Lots of other walking trails too. You can picnic, fish, rent boats, go camping...

There's a tent campground and 4 cabin tents on platforms which are so much at the lake shore that they almost hang over the water. 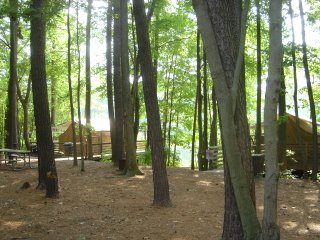 It wasn't a work trip that took me to Buena Vista, VA last weekend, but a bike rally at Glen Maury Park. I'd driven past the sign to the park many times previously. Somehow I had pictured a small flat RV park in the middle of town which occasionally hosted a bluegrass festival. Well, it does host a bluegrass festival, but there the accuracy of my vision fades. Glen Maury actually is a quite large park, with lots of green space between its 3 camping areas. Nice pool. 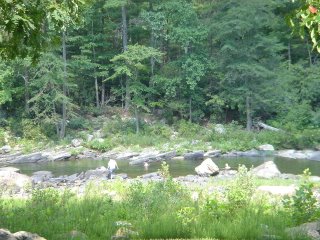 Lots of good riding in the area too.Sue and I rode to the Goshen Pass and enjoyed the cool river for a while before returning to camp for dinner. 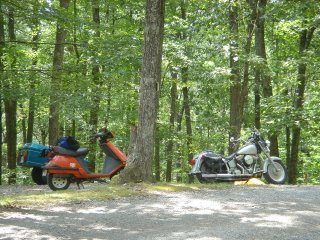 She rides a Harley Fat Boy; I ride a Honda Elite scooter. Quite a pair. We had a great time.
Posted by Gypsy Jane at 12:12 AM