I Can Sweep My Floor!

Whoever decided that RVs should have carpet - anywhere - wasn't too bright about housekeeping. Carpet in the kitchen is just plain stupid. I have removed carpeting from every motorhome I've owned. On this one I kept procrastinating, because it is NOT a fun job. The carpet is laid first, then they put the walls in. So all you can remove is what you can get at. I own a very nice Kobalt carpet knife set, but it's not magic.
Today I cussed the carpet for the last time - at least in the kitchen. 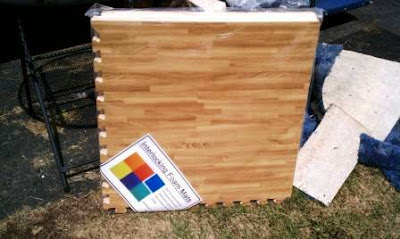 I had bought this flooring for the van project, and then decided not to use it. I wasn't sure how it would hold up to the stress of heavy camping gear being loaded in and out and sitting on it all the time. And I found that neat rug on craigslist which works perfectly in there and can come out for cleaning if necessary. Having 3 boxes of interlocking foam mat flooring didn't bother me, though - I have a place for it. 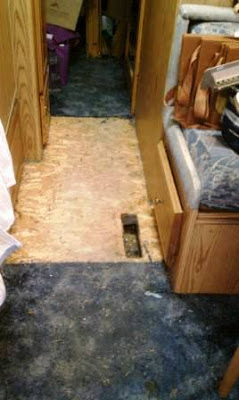 The removal was easier than usual. The original kitchen carpet had already been removed and replaced. The replacement was tacked in some places, but I didn't have the usual dusty can't breathe for a week underlayment to deal with. Yay. 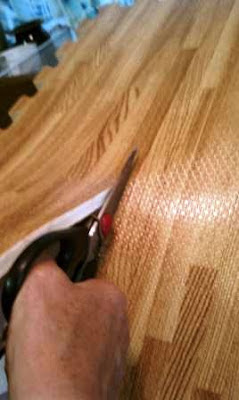 The foam blocks are a snap to install. They cut with a knife blade or scissors. 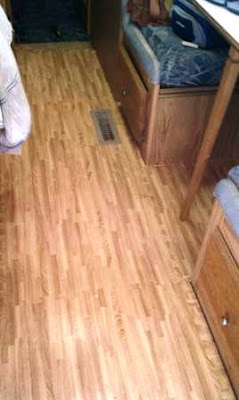 The hardest part was where the room was just the wrong size - by under half an inch. I trimmed the interlocking fingers and used the off-cuts to interlock with them. 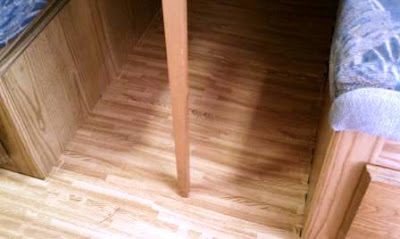 It looks good, it's cushy to stand on, dropped items are not as likely to break. It took me one package to do the kitchen. Some other day when I can take everything outside with no threat of rain or work, I will put the other two down in the living room.
Posted by Gypsy Jane at 7:48 PM