I couldn't have picked a better site. It was almost level, large, with a west facing yard, overlooking the lake. 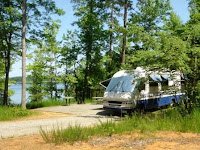 Paths led from the campsite down to the lake, where boats were pulled up to the shoreline. My campsite's shoreline had a gentle slope into the water. 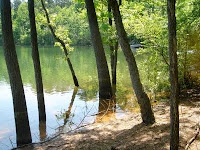 After spending much of the day sorting stuff in one of my storage bays for more logical storage, 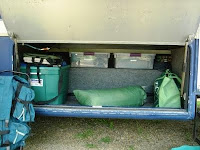 and being taken for walks by the Callicat, I blew up one of my float rafts and went down for a swim. The water was absolutely perfect in temperature and I floated out to where the inlet opened to the main lake, where the "no wake" buoy is. Remember that kayak I want? I still want it!

Later my neighbor in the next campsite over invited me for a ride in his new-to-him boat. It is a very nice motorboat and we zoomed around the lake for a while. It was a blast. It has been way too long since I've been in a power boat. He'd just got this boat, this was its first time out on the lake for him, and then we discovered that when the gas guage says 1/4 tank - it lies. 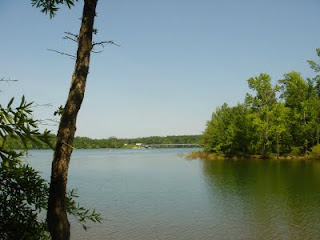 Up until that point there had been lots of boats on the lake - but just as we ran out of gas, they all vanished. The sun told me we had half an hour of daylight left. No phones on board. Oh no, not another learning experience! We drifted, watching for boats, and finally saw one way off in the distance which seemed to be coming toward us. Did I mention Kerr Reservoir is a BIG lake? I picked up his red towel and waved it as a distress signal hoping the distant boat would see it.

I don't know if they did or not, because a boat we couldn't see due to the sun in our eyes to the west appeared - much closer - and they did see it. That boat turned out to be the neighbor on the other side, and they towed us back to camp. How's that for serendipity? 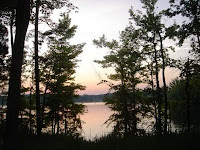