Last weekend the Callicat and I went to a Pig Pickin' hosted by my friends Denise & Thurmond. It was well-attended and a good time was had by all. Thurmond makes some wonderful barbecue, and it was a very very hot day in spite of the pond and the shade. I was not only stuffed, but the heat got to me. 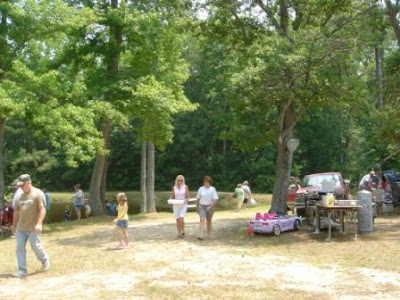 Several of us camped on their land in RVs all weekend. Last year when I was there, the wind came up and put my awning up on my roof. This year the wind came up when we were back at camp, and we all closed our awnings. And the storm went away. Rolling up awnings is good anti-storm medicine?

As I said, it was very hot. I had the a/c running, and was plugged in to a circuit that could handle it - but my 30 - 15 adapter could not. When I broke camp I was surprised to find it had MELTED and melted the end of the extension cord (heavy duty but not heavy-duty enough) with it.

I now have a shiny new pigtail adapter which should not have that problem. Normally my 2 RV cords are enough for where I plug in, but D&T's power is further from the rig. I intend to acquire a couple more super-heavy-duty RV cords before next year's Pickin'.
Posted by Gypsy Jane at 11:26 AM