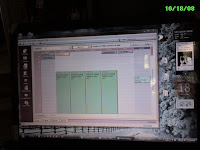 OK, I have a shiny new Treo 755p. I take it out of the box and charge it the recommended 12 hours and prepare to install software. The included disc says Vista Users see website. I follow that link and it's the link that says on Vista you should install the new feature-deficient Access version of Palm Desktop. Now, I already know from my adventures when I got the Vista laptop that 4.1.4 runs fine on Vista once you get it to install. So I decide to ignore the instruction and pop the included disc into the CD tray. Install shield does its thing - and hangs up. Well, fooey. I reboot, realize the key last time was uninstall first, in spite of Palm's statement that you install over the previous. So I uninstall. In goes the disc again. Still no good. It just hangs up. I spent some time chatting with tech support and wound up downloading the Access version. It installed, but I hated it. Light blue on lighter blue, no options, no color-coded categories, and no birthdays in the desktop calendar. I don't know what else they left out.

I woke up with inspiration: Even though I uninstalled the 4.1.4 and the partial 4.2 before I installed Access's desktop, it still found parts of "a previous version". I figured out it probably dealt with them.

So - I booted up the computer and uninstalled Palm Desktop by Access in Control Panel uninstall programs. I rebooted the computer. I closed everything I could, windows sidebar and veriface and everything. Disconnected from the internet and closed my antivirus.
Put in the disc that came with my 755p and **WooHoo!!!** It installed fine. It runs fine. It installs programs and files to the handheld fine. And I'm not even running it in compatibility mode.

So if you miss your features, it is perfectly possible to run 4.1.4 or 4.2 on Vista. Just make sure the prior version is completely deleted and NOTHING, INCLUDING ANTIVIRUS, else is running after you reboot, and install the program.

What I did:
1. Uninstall Access desktop version
2. Reboot Computer
3. Turn off ALL running programs, disconnect from internet and close antivirus.
4. Insert installation disc that came with Treo 755p
5. Autorun. Uncheck download latest settings from internet (because you are off-line).
Posted by Gypsy Jane at 11:08 AM