Bad day on the roof

Some days it's best to go play, and I probably should have. But no, I want a dry roof, so I worked on it. Up in the corner where the worst damage is, I wanted to put a big rubber piece, instead of just relying on the liquid rubber that will cover the rest of the roof. The plywood is messed up under there and I thought a fat piece of new rubber would be more likely to behave. The procedure for this is to use contact cement on both sides of the rubber. The stuff sticks together really quite well.

Too well. The piece I had was too big for me and I didn't realize it until it was too late. It got away, stuck to the roof, stuck to itself, ripped a big fish-shaped tear in the original rotten rubber. 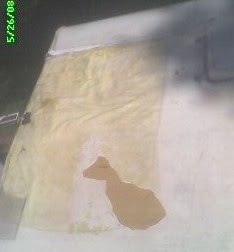 At this point a lot of tools got pitched from the roof to the ground. I was not amused.

To salvage the operation, (thank you, Danny) Danny applied the patch in the other direction, which covered the holes including the new one, but did not go all the way up to the molding in front as planned. The leftover length was placed in between, but 3 lengths of ETERNABOND that I don't yet have will now be required to bridge the gaps.


Now I wonder if instead of scrubbing off all that "paint", I should have just pulled off all the old rubber. Actually I would probably have done exactly that if the plywood underneath were not messed up, but I don't think the Liquid Roof would do too well directly over damaged plywood.

And before you ask, yes I tried to get this done professionally but couldn't find anyone to do it at all, much less affordably.
Posted by Gypsy Jane at 6:47 PM