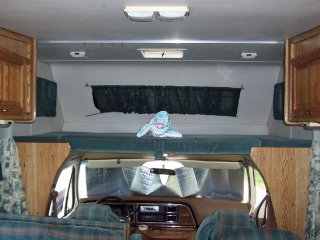 June 29, 2006 – Opening The Can Of Worms
That weekend, as I started to transfer items from the DodgeLodge II into the new Motorhome, we had torrential rain. Torrential rain is good: if you have any leaks in your Motorhome, you find out about them. OK, one in the bedroom, from that puncture hole. The cabover we knew about. I believe the water got in through the lower seams, although the windows are another possibility. And there’s a leak which drips down from the roof air conditioner. That one was a rather unpleasant surprise. I said a few colorful words and bought a really large tarp. With a big blue tarp tied securely over the top of the rig, and the awning partially open, I proceeded to continue with my moving. I put up my towel bars and hooks and paper towel holder etc. (I have a set that was made specially for me by a blacksmith I used to travel with.) The bathroom is done. The clothes are transferred into the closets and drawers. Most of the kitchen stuff is put away. I was washing my china when Danny decided there’s no time like the present and opened the can of worms in the cabover. I love that man.
I had seriously underestimated the damage, but it wasn’t as bad as he thought. And he loves challenging tinker projects. We took the mattress thing out, and ripped out all the damp rotten stuff. ! 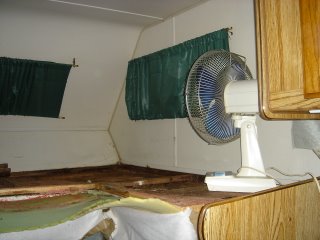 Not nearly as bad as the DodgeLodge II had been. Ceiling and side walls are ok. Just the platform needs rebuilt. He’s got the framework in place already! I am working locally this week and next, so I don’t need to drive either rig for work until July 9 at the earliest! TG
Meanwhile, I went on line to see if anyone anywhere had posted advice on how to repair cabovers. I’ve done one already, it was no fun, and it was very much a figure it out as I went kind of thing. I was hoping to learn by someone else’s experience. I ran across some stuff by a guy who had done all his seams with some stuff called eternabond. It sounds great, but it’s expensive. I’ll spring for it if it really works, so I’m going to do some more research. I don’t care what it looks like. What I want is NO LEAKS.
Posted by Gypsy Jane at 7:20 AM