June 27th, 2006
OK, so for some perverse reason I’d like to try blogging – WHY??? I am not under the illusion that I have anything fascinating to say on a weekly basis. However, I enjoy reading my friend Sue’s blog. If my other friends and family would blog I would read them. And when I searched on cabover repairs I ran into someone’s blog and it had Useful Information.
So – I have just acquired my 3rd motor home and maybe that’s a good excuse to start a blog and give it a try.
So – who is GypsyJane?
“I am a rambler, and a traveler on the road, can’t settle down…”
When I was about 12 or 13, I encountered a Ford Travelwagon in a showroom and knew I had to have an RV. Not that I had a clue what an RV was. But that was my dream home, and my dream car, when all my friends wanted Mustangs and souped up Chevys.
Life happened and I did other things – got married, raised 2 awesome daughters, lived in houses. Once I bought a school bus but the time wasn’t right and it never did get converted to a camper. Eventually I did get a camper van. Dinette converted to bed. Pump sink. No toilet. I loved it.
Next came the first motor home, the first DodgeLodge, in 1995. 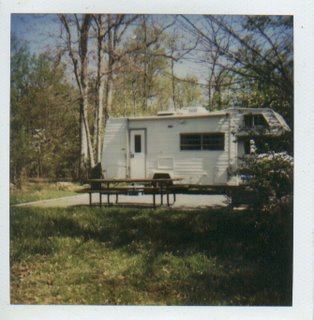 “It’s old, it rattles in strange places, sometimes it breaks down. But it keeps a smile on my face, ‘cause I can drive around in my Motorhome….”
It was a 79 Shasta on a Dodge nose, and I began living in RV full time. I took the couch out to make musical instrument storage and slept in the cabover bed. I boondocked in Baltimore MD. I was camp host at a state park. I went to Florida for the winter.
I was an itinerant craftsperson on the Rendezvous circuit and also had a 15-passenger van – and I could only drive one thing at a time so I traded off the DodgeLodge for a travel trailer. It had twin beds, one of which I converted to a workbench and crafts material storage. I took out the dinette and made an office/music area. It had a motorcycle rack on the back for my scoot! It went north to upstate New York and south to Florida and uphill to West Virginia where my transmission died. It went to Richmond VA where I was a Nanny, and to Altavista where the van finally quit entirely. I lived in the trailer without moving and worked and saved and bought the second DodgeLodge. 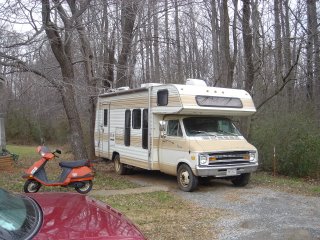 It was a 78, and I rescued it from someone’s back yard. A friend and I stripped the sodden cabover down to bare metal and rebuilt it, I had some mechanical repairs done, and I was on the road again.
“See my taillights shining, as I travel to the Blue Ridge, shining like my eyes, you know I’m free”
On the road cautiously – there were some electrical problems to be worked out. My taillights didn’t work right. When I stepped on the brake, my clearance lights came on! I didn’t go far. While I was doing these repairs, I had met Danny. We took our first motor home trip together before we got my taillights to work properly.
The motor home lived in the driveway and I tried the housey thing again. NTS: never do that! I was climbing the walls, homesick for the road, bad case of tumbleweed fever. Then I started doing reset work, traveling, doing store sets and planogram maintenance. I’m on the road 4 days out of 7 – at least, and happy. (Danny has a motor home of his own also, but he also has a Responsible Position and doesn’t get to use it nearly often enough.)
The DodgeLodge II has served well as a reset specialist’s home. Only one breakdown on the road, and though it took me $50 in roaming charges to get a tow truck, it only cost about $20 to fix the problem. It is, however, a 21 foot rig with some serious structural issues and too many things that don’t work.
I put a bit of discipline into a savings program and a lot of prayer in to Grandfather and as the savings grew I started looking around for Motorhome # 3, RV # 5. Truthfully, I expected to wear the DodgeLodge II out completely by the time I saved enough and found what I was looking for. If you’re one of those people who can afford a New Motorhome With A Warrantee, you can’t even imagine living on my income so don’t even make comparisons. But there were certain things I’ve come to think are Important. Safe, reliable, structurally and mechanically sound. A 3 way fridge. Cabinets that open UP rather than OUT and are made well – no plastic drawers. Intelligent design: no wires or pipes diagonally taking up the entire cabinet rendering it unusable as a cabinet. A monitor board! (DodgeLodge II doesn’t have one. To know if the black water tank is full, you shine a flash light down the toilet!) Heat tubes and water pipes running together on the same side of the coach. Stuff like that. And I wanted a bigger rig, something with a rear bedroom.
2 weeks ago I was browsing motor home ads on the internet and I found one that – pretty much – fit that description. At a price for which I could write a check that wouldn’t bounce.
To be continued.
Posted by Gypsy Jane at 7:09 AM