Repair of the Month Club Membership 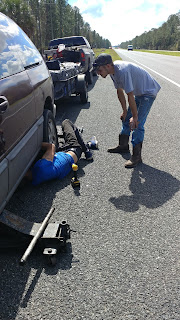 I've been traveling with Maxine the Minivan for several years now. She's been a wonderfully reliable vehicle. She is, however, a 19-year old and has covered a lot of miles. And someone seems to have signed me up for the Repair of the Month club. I'd like to cancel my membership, thank you.

It started in March when a brake line blew out in Florida on my way to the Osceola NF. Of course, I was attempting to stop for a red light when that happened, and I'm truly grateful that the traffic going the other way hadn't started moving yet. I got stopped on the shoulder and a mobile mechanic came out and fixed the problem.

Then I heard power steering noises on my way into Lake City. Yes, the fluid was low. Added fluid and that took care of it. For then.

When I got to my SC daughter's, the high pressure steering hose blew and spewed fluid all over her father-in-law's driveway. Got that fixed.

In April, I was driving, on a Sunday, from Stevenson AL to Memphis TN. I had just got on the interstate, in pouring rain, when I heard an ugly crunchy noise and my wipers quit working. I couldn't see squat! I managed to get off at the next exit and parked at the conveniently located convenience store and drank coffee 'til the rain stopped. Then I went to my Memphis destination and Maxine got to visit another repair shop for a new wiper motor.

At the end of April (sometimes the ROTM Club shipments come early), on another rainy day, I suddenly had no defroster and yet another visibility problem. Cue installation of new blower motor. I had for about a year only had on and off for the blower, not the full range of speeds that I was supposed to have, so I was even kind of glad about this one. Have all the speeds now, and it's quieter too.

During May, it became apparent that coolant was getting out somehow. A new thermostat and new radiator cap did not fix the problem, so Maxine went into the shop yet again, for a radiator replacement.

And then the wipers suddenly have only high and low speeds, don't have intermittent, and don't park themselves. After investigating all the possibilities, the mechanics who installed my radiator determined that the wiper motor was at fault. So I'm headed back to Memphis to get that taken care of.

And at the first rest area in Arkansas, the transmission started slipping. I put 3 quarts of fluid in and went to a repair shop. It's always an adventure when you have to pick a shop in a place where you don't know anyone and you're on the road with your rolling home, but I checked Google Maps, and the reviews, and went to Jody's in Van Buren AR. Drop the trailer, put the van on the lift... Well, the bottom of Maxine is thoroughly lubricated by tranny fluid now. The radiator includes a transmission cooler (who knew?) and the hose connecting them was old and set in its ways and decided to blow tranny fluid Everywhere instead of where it belonged. Fixed now. I recommend this shop: they passed up a golden opportunity to fleece a lone woman traveler.

So I think maybe Mercury went retrograde or something, as some of this stuff came with do-overs. (I also had to get my new glasses done over!) I'm hoping that once I've gotten the wiper motor thing straightened out in Memphis, that we can stop this series of repairs and go back to buying gasoline and doing regular maintenance.