Expletive deleted - the rest of the story. 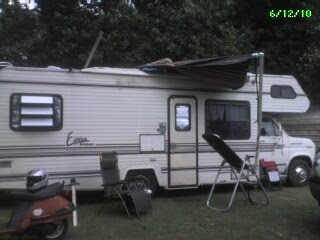 But there are many worse places for this to happen and few better.

What happened is a quick storm - one of those "isolated thunderstorms" - went by. It mostly missed the pig picking but the wind did this to my awning.

What is really cool is that if it had to happen, it happened when and where it did. Not the previous week when I was alone and getting ready for a long drive to work. Not as part of the rain/thunderstorm that hit later that night. There were guys around who could get it off the roof and rolled up and screw the broken bracket to the rig so I could drive. And yes - no one was hurt.

That was the Attention Getting Event for me this weekend, but most of it I spent having a blast at a pig picking hosted by friends in Emporia. I met lots of neat people and ate lots of good food, swam, rode scooter, rode in their side-by-side... Lots of fun. Actually, I was too busy having fun to take pictures - the awning picture happened because I was taking them for insurance.
Posted by Gypsy Jane at 3:24 PM