This is a gravesite - here lies the Wildwood Pool.

The sign says:
Wildwood Pool, 1929-1964
For thirty-six years, a swimming pool provided Radford with water recreation at this location in Wildwood Park, to give a place "in which to avoid bad habits". The opening of the pool and a dance on Independence Day in 1929 attracted over 10,000 people from Radford and surrounding area.
The pool was 200 feet long and for a while received its water, described as "always cold", directly from Connelly's Run. The complex also featured a bathhouse, concession stand, ticket booth and a parking area. The pool was filled in and closed in 1964. Portions of the west wall can be seen beyond this marker.


I've commented on this before. There are so many places today where swimming is not permitted.

So many pools gone.

And so many swimming places under-utilized, like my own beloved Izaak Walton park. 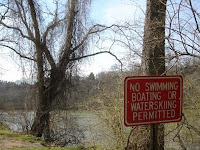 I suppose instead of swimming, people today spend all their summer indoors, with a/c, surfing the internet.

Of course, sometimes there's a good reason not to swim. 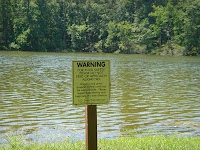 This pavillion at Santee State Park in South Carolina indicates that swimming used to be popular there. 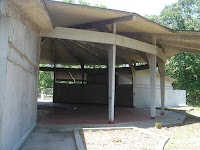 But I'm not even tempted to feed the 'gators.
Posted by Gypsy Jane at 9:00 AM