In January, before I went to the Alafia, I camped at DuPuis Management Area's family campground.  I posted when I got camp set up and promised more later.  Later has arrived. 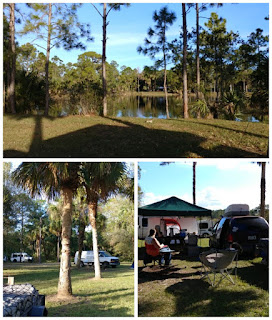 The campground loop goes around a good-sized pond, and is quite pretty.  I met up with several friends from one of my Facebook groups there.  If I were camping alone, there's a neat campsite on a spit of land that juts into the pond that I would want to grab!  I understand there's also an alligator - well, of course there is, it's Florida - but I did not see one.
This was the first time I used my new Connect-tent with my 10 x 10 canopy.  It made a nice stand-up-in-it space.
Posted by Gypsy Jane at 7:49 PM