What a Busy Weekend!

When the work week ended, I returned to the Escaper to continue transferring Stuff. Friday was largely taken up with a few more repairs. The furnace board decided it would be a good time to go out - so although I had heat last weekend, I didn't have it Thursday morning. That and the water heater won't ignite. OK, so the furnace is fixed and the valve for the water heater is ordered.

My friend Susan joined me for lunch, and then my other friend Sue came to spend the weekend.

While I was awaiting her arrival, I heard and investigated some rather persistant meowing. I meowed back and was answered - and eventually found the source - a pretty calico. Who promptly hopped into the Holiday Rambler and made herself at home.

Sue arrived and we fed the cat hot dogs and tuna, which she devoured like she'd missed a lot of meals. She spent the evening with us, went out sometime during the night, came back in early Saturday morning. She went back out and off into the woods and we didn't see her again all day.

My friend Danny came over to help with alterations. He'd built me a counter for the guitars' bed, which fit in place perfectly.

He brought his saw and cut the ends off my bifold door, which is now Counter Space in the kitchen.
And he made the offending chair go away from my living room. Yay. We also rode over to my storage and picked up the microwave stand before he left.

I hung this picture, too. In the Escaper there was no space to hang it, but it goes quite well in this dinette. 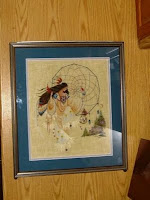 This is counted cross stitch (with leather and beads) which Elder Daughter stitched for me some 12 years ago, and it's awesome.

I found out my work schedule had changed and my vacation starts THIS week! Excellent.

Danny called and said he'd passed a small festival on his way home, very close to where we were, that he thought we'd enjoy. So after lunch we went - to New London Day - and found a bunch of our friends from Rendezvous 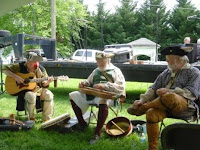 playing music and doing history things. So yes, we enjoyed it very much.

Sue and I took the Holiday Rambler and her truck to Izaak Walton, where I parked in my usual favorite campsite, and enjoyed dinner and a campfire.

Sunday morning after breakfast, we went back and picked up the Escaper. The cat came back and we checked around for possible owners - nope, she's been hanging around for a week or so, no one's come asking for her - so I've been adopted. We added a PetSmart run to our list of errands. The rest of that list involved contact paper and molding to finish the Guitar's Bed project. Had an awful time finding contact paper. I remember when it was easy to get and there was always a really large selection. Now, there are only a few patterns, and the clerk at WalMart looked at us like we were from Mars. (It's in the kitchen gadget section with shelf paper.)

I parked the Escaper near the HR, we had lunch, Sue went home, I went to work on the rig.

Here's the Guitar's Bed as it originally was: 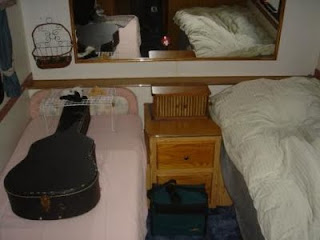 And with the counter Danny built me, I'll be able to stand the guitars and stow a lot of other gear too: 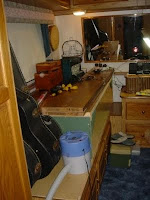 I used the old "headboard" for padding for the heads of the guitar cases. 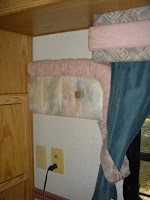 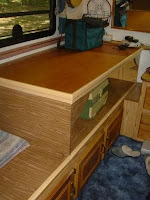 It has cat approval. 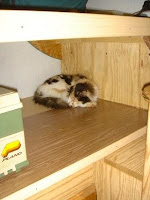 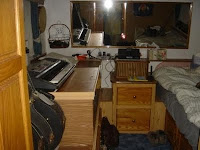 The chair is gone, the stand is in place, and I have an office which does not involve the dinette! 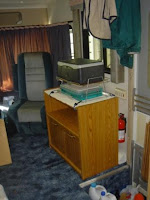 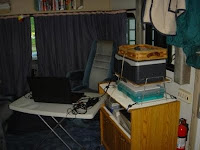 And that counter space issue - The bifold door I salvaged when Jon and Tina moved to Florida is now a sliding counter. Ready for use, it opens to provide counter space and access to kitchen Stuff. 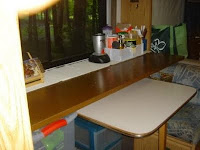 Ready for travel or dinner, the counter part is folded up out of the way, keeping Stuff from wandering. 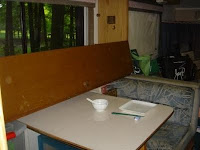 It can stay back against the window, or slide forward for convenience when doing serious cooking. I still need to arrange some hardware to make it slide easily, but it's functional now.