HOW TO AVOID EZ-UP CANOPY COLLAPSE!

Have you ever seen what happens when an EZ-UP style canopy is caught in heavy rain? 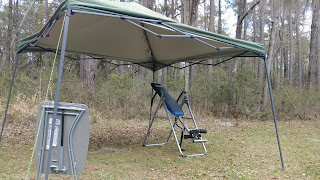 I've owned one for several years, which I set up at flea markets or when I'm camping for a decent amount of time in one place.  I discovered right away that the scissors style frame does not allow water to just run off like it would on my 18th century dining fly.  The frame traps the water and it pools there, and you have to reach up with a broom or something and raise the cover up so the water pours off.  I would watch the weather app and if rain were possible I would take the cover off.  Therefore it was only good for shade, not as any sort of rain protection.

I have camped next to several EZ-UP DISASTERS.  One of my neighbors' canopy got caught in wind and rain and mangled badly.  He put it back up in front of his tent but it was lopsided and a lot shorter than it had been.

Another year the folks camped next to me had their canopy in front of the door of their trailer.  It rained heavily during the night, the canopy collapsed and blocked their door, trapping them inside.  It took them quite a while to get out.

When I parked at the end of March for a long term camp due to COVID, I set my canopy up next to my van. 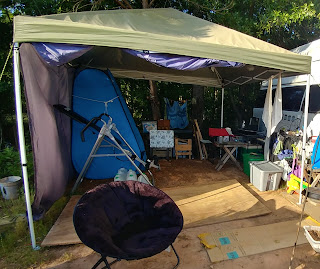 And it was only a matter of time, and one night an unexpected heavy rain fell while I was sleeping.  I was sure I had taken pictures of my mangled canopy, but apparently not.  Trust me, it was not salvageable.  The frame was bent in places and broken in places.  It still held a pool of water large and heavy enough that I had to cut the fabric to let it out and be able to clean up the mess.

(If you want to see what all that was like, this other blogger had a similar experience and did take pictures.

I hauled the frame to the dump, rolled up the cover, and ordered a new canopy.  When it arrived, I put the new cover aside, and set up the new frame with the old cover.  I wanted to test my theory.  When I took the canopy down 6 months later I knew my theory worked. 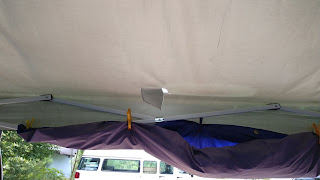 Since the scissors frame holds the water in, I figured that if I put holes in the fabric where the water would pool, that would let it out, keep it from pooling, and keep it from collapsing the frame.  I did not want to put holes in my brand new canopy top, and the old one already had a big slice where I had let the water out the day it collapsed.  So I sliced holes in the other three sides and waited for the next rain to see what would happen. 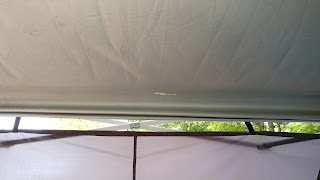 IT WORKED!!!  Rain came, rain hit the canopy, rain ran out through the holes instead of pooling. 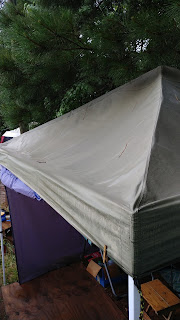 The canopy withstood quite a few heavy downpours over the summer.  The water goes through the holes, and hits the ground right near where it would have if it would have drained off the roof properly.  Buckets placed there keep me from having to haul dishwater.

So when I do open up the new canopy, I plan to put grommets in the places where I put the slits in the old ones, so the holes will be neat and finished looking.  I was worried that my slits might tear, but that's good tough fabric and they didn't tear at all.

I got a KAYAK!

OK, COVID happened, I stayed in one place for 6 whole months, long enough that Gas Buddy asked if my card had been stolen.  My eighteenth century events were all cancelled, so I did home improvement (another post) and then unloaded my time traveling gear into storage.  My intention for now is to do a lot of woodswalking, bike riding, and every chance I get KAYAKING.
I got an ORU BEACH folding Kayak.  My VA daughter also has one, so we took them out for their first swim when I got to Virginia. 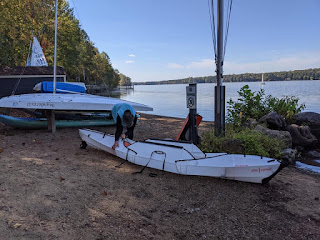 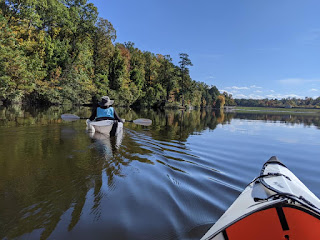 It behaves very nicely in the water.  Although ORU makes more adventurous kayaks, mine is a flat water kayak - and I am a flat water kayaker.  I have no interest in careening down rapids; I like exploring soggy cypress groves and stuff like that. 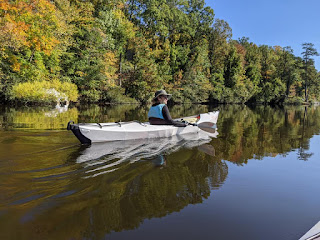 So stay tuned for kayak explorations.
Posted by Gypsy Jane at 6:26 PM No comments:

My Thoughts on RV Design

My home has had wheels since 1995. I've had dwellings as small as a Dodge Grand  Caravan and as large as a 32 foot Class A motorhome. With an assortment of trailer and Class C in between. So I have formed some opinions on RV design. 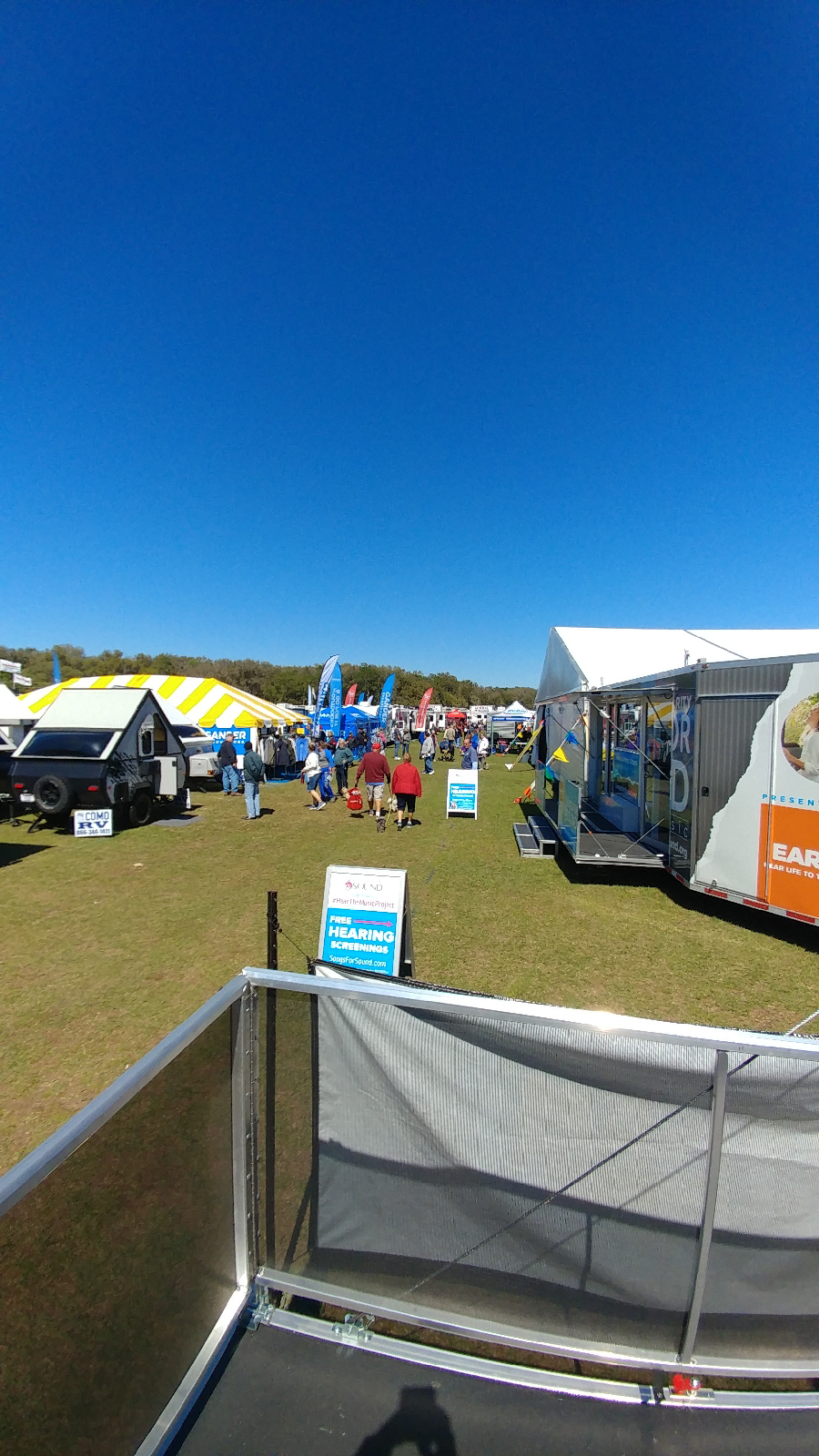 Thursday, I went to the Ocala RV show.  I saw a lot of RVs. Mostly travel trailer and fifth wheels, although there were motorhomes, some Class B camper vans, some truck campers, and some A-liners.
It was a pleasant day to spend at the show, but I was disappointed by the RV industry.  So many of the rigs, although made by different companies, looked the same.  Same floor plans. Same features. Same features omitted.
My long standing RV pet peeve continues: rigs that sleep 6 or 8 people but have NO closet space.  Really? Are nudists a large part of your market base?
Other peeves:
Slides.  I found very few rigs without slides.  And even though slides have been such a popular feature for quite a while now, they continue to design them in such a way that you can't use your rig without deploying the slides.  Which means you can't make a quick stop on the way for coffee or to use the bathroom.
Beds: either they're Queens and Kings, or they're hole in the wall bunks that are impossible to make up and claustrophobic to sleep in.  How about some rigs with single or full mattresses and some useable floor space.  Ever try to do yoga in an RV?
Entertainment: There are always televisions. But never book shelves.  It's been a while since I've shopped RVs, so i hadn't seen the outside TVs before.  Flat screen TVs built into the outside wall of the RV.  Why?!  If you have that feature, please do not park next to me.
Something else that surprised me... The show was in Ocala FL, which is a horse area. It was held at an equestrian center.  So I was surprised that living quarters equipped horse trailers were totally not represented.
And another thought I had... There were no rigs that seemed like they might be easy to adapt to use by people with mobility problems.  Narrow doors and passageways, awkward bathrooms, beds with little space next to them.  I mentioned this to several of the sales reps and was assured that there are companies that would remodel rigs to accommodate chairs and scooters.  I didn't find that at all reassuring, since it would have to be extensive and expensive.
I know that there are no perfect rigs. But it would seem that more options would be a good thing.  RVs for single people, mobility challenged people, people who need to carry craft supplies and musical instruments and books, or who do yoga.
I did see one rig i really liked. It was a pull behind toy hauler, with the ramp that can also be a porch.  It has enough room for my music and craft stuff and a decent house layout. 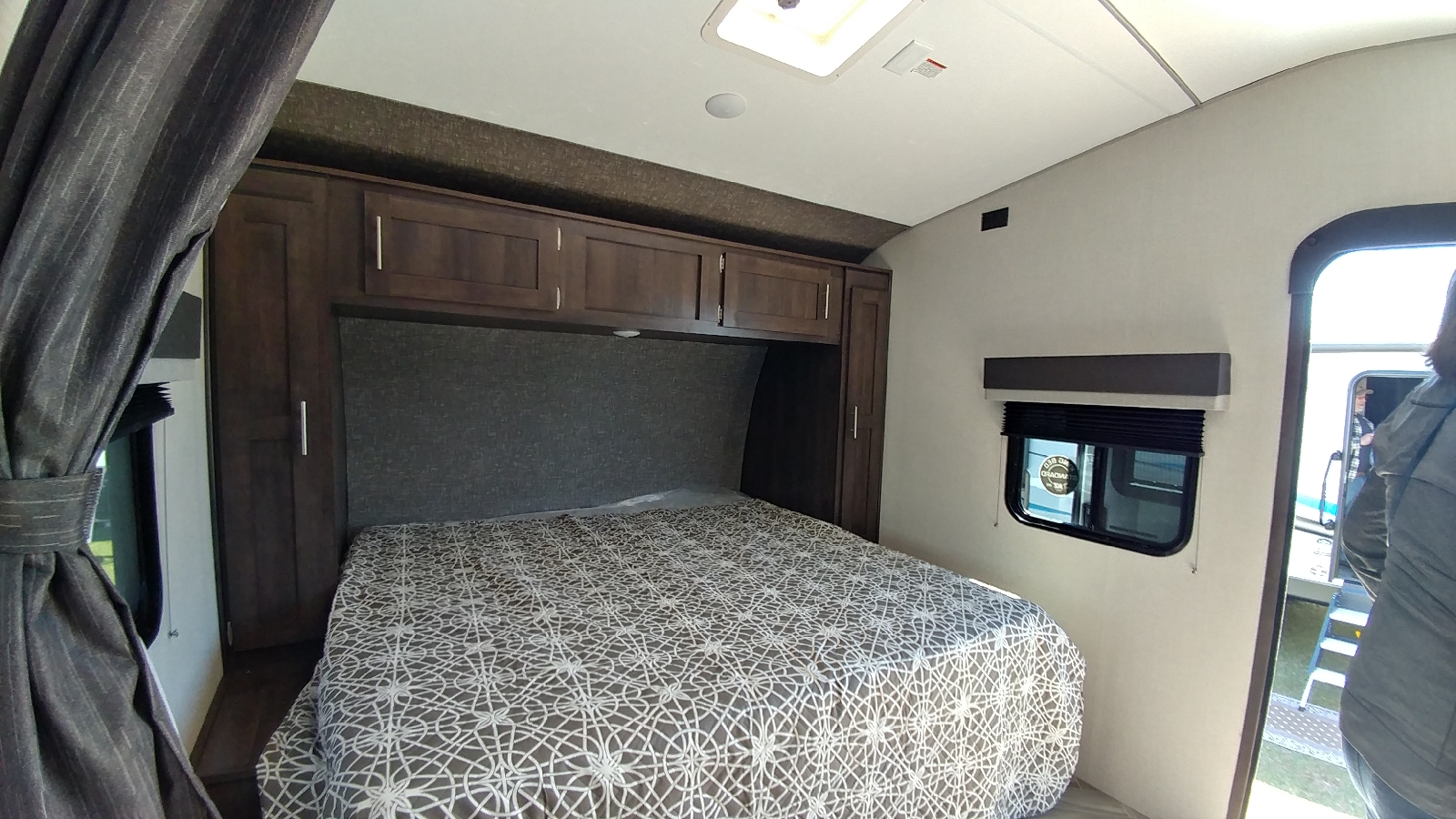 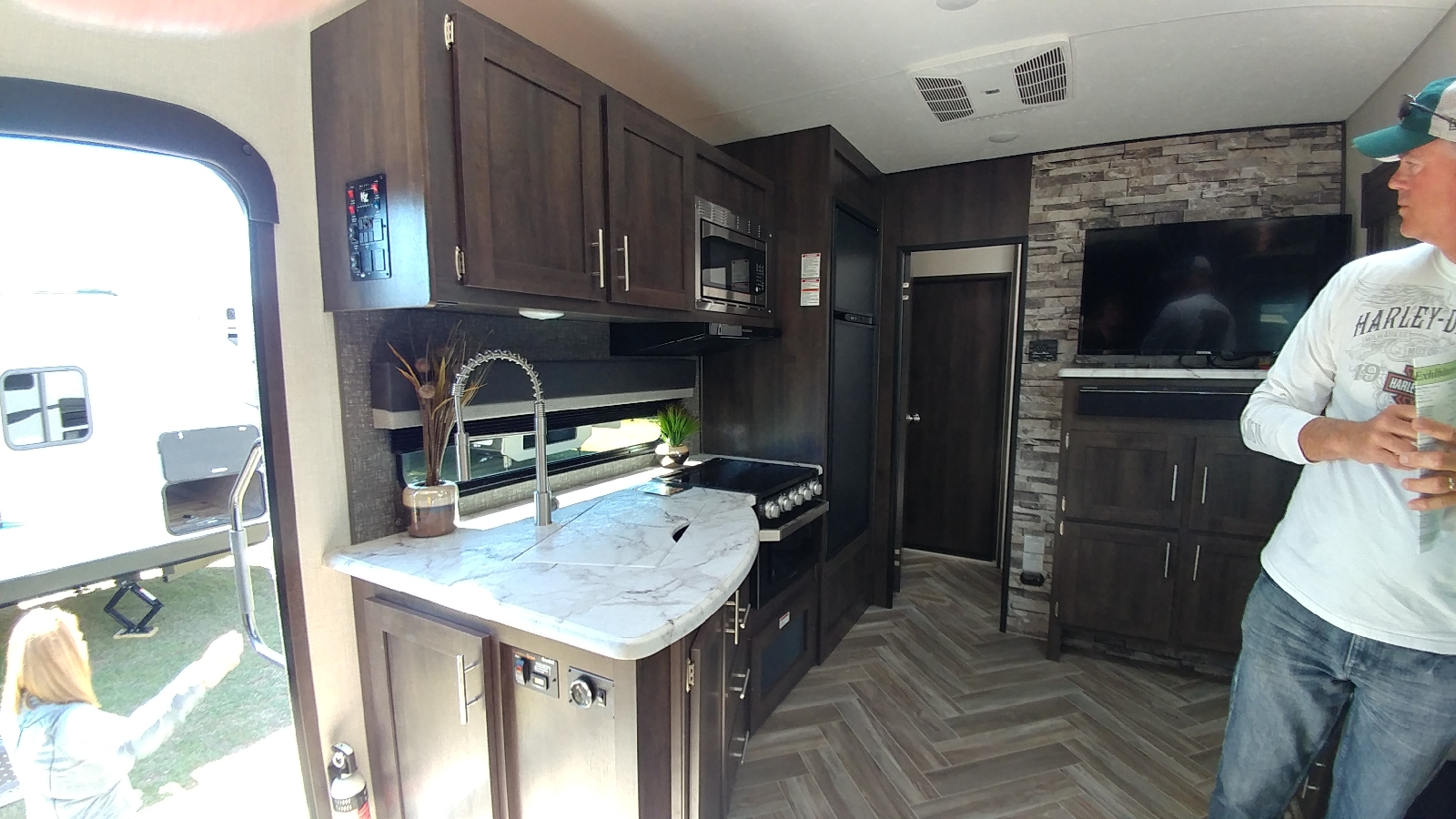 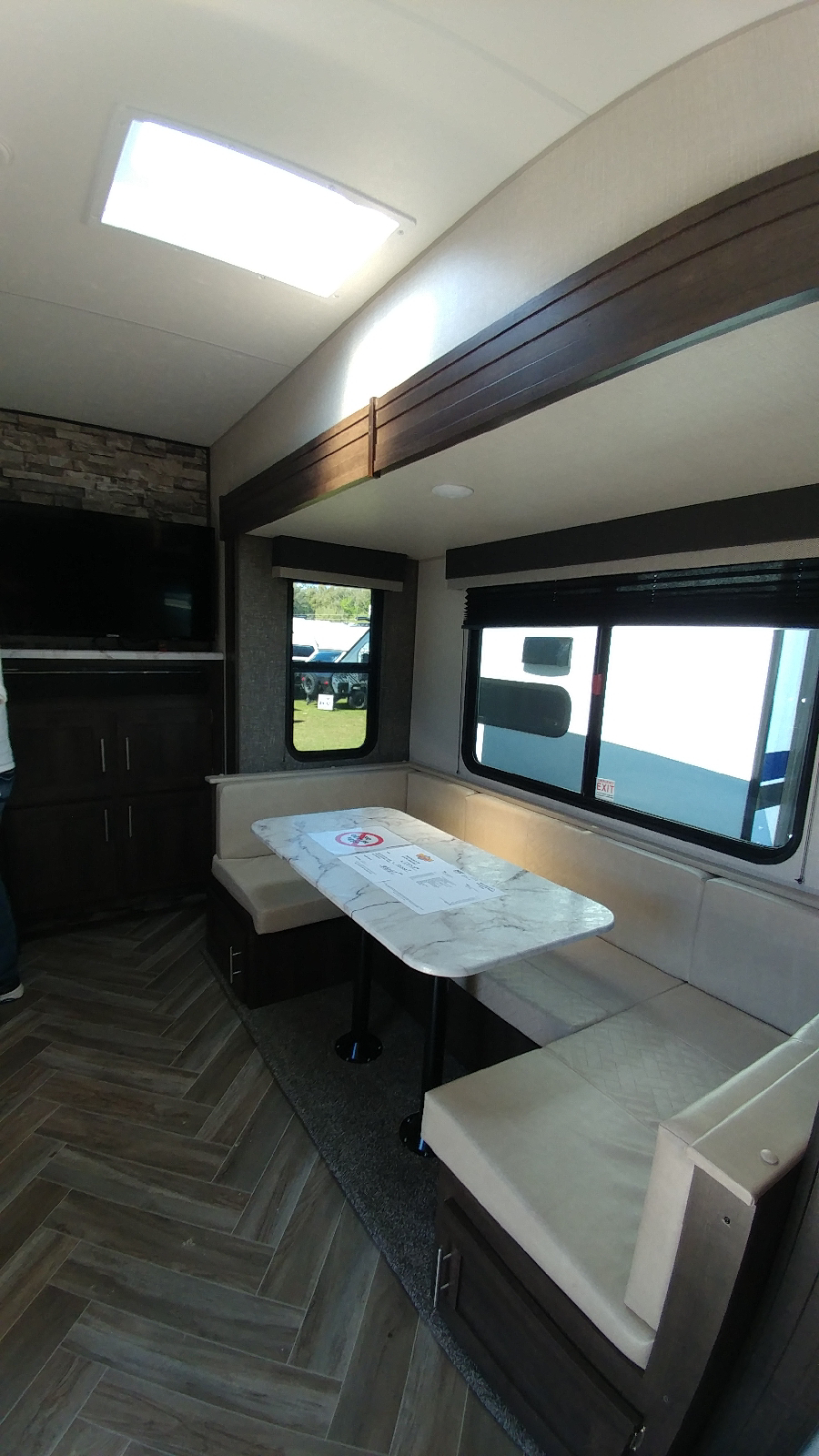 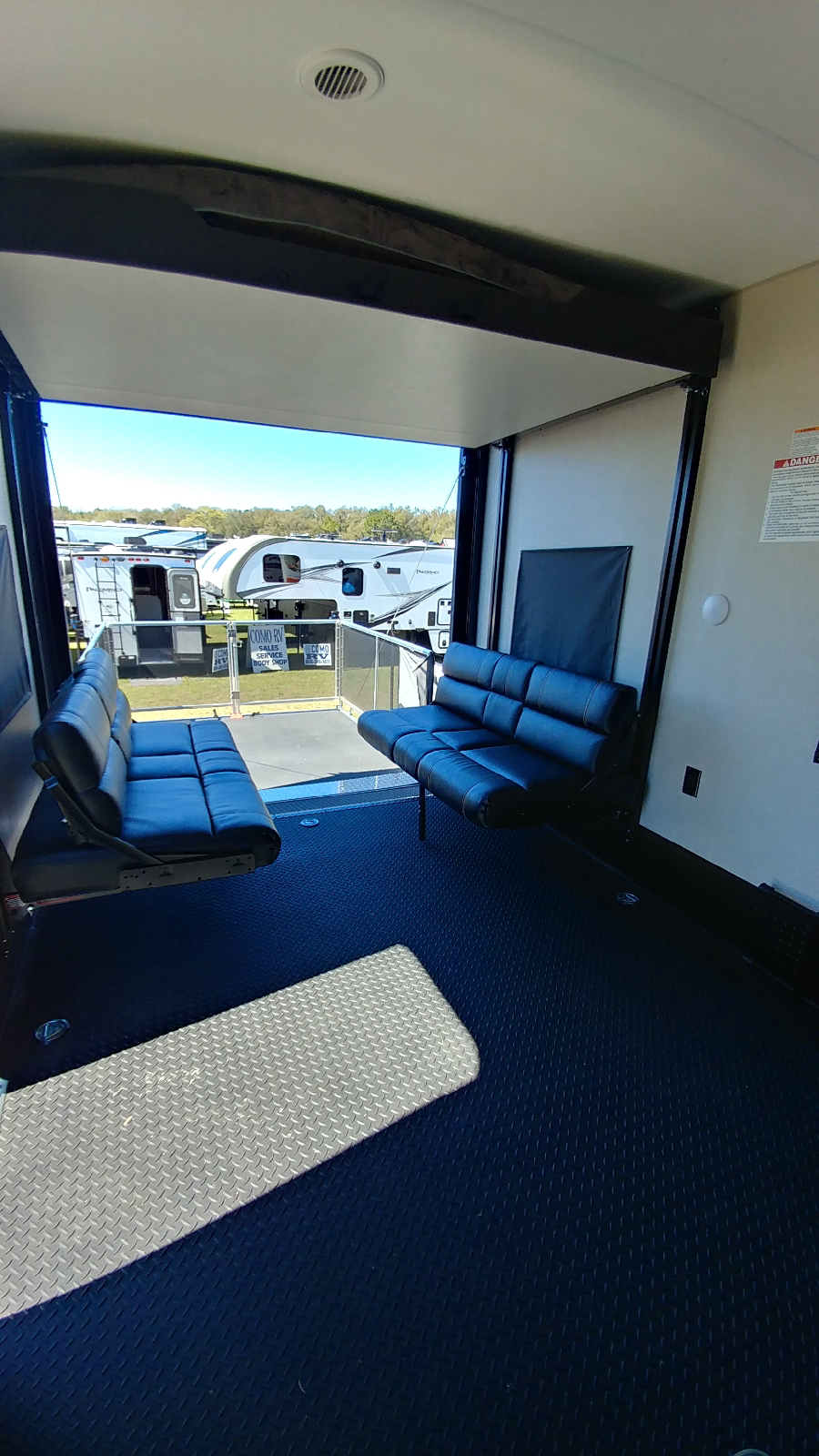 It did not follow me home because any trailer larger than what i currently pull would make it extremely difficult to visit my daughters.
Posted by Gypsy Jane at 9:37 PM 2 comments: 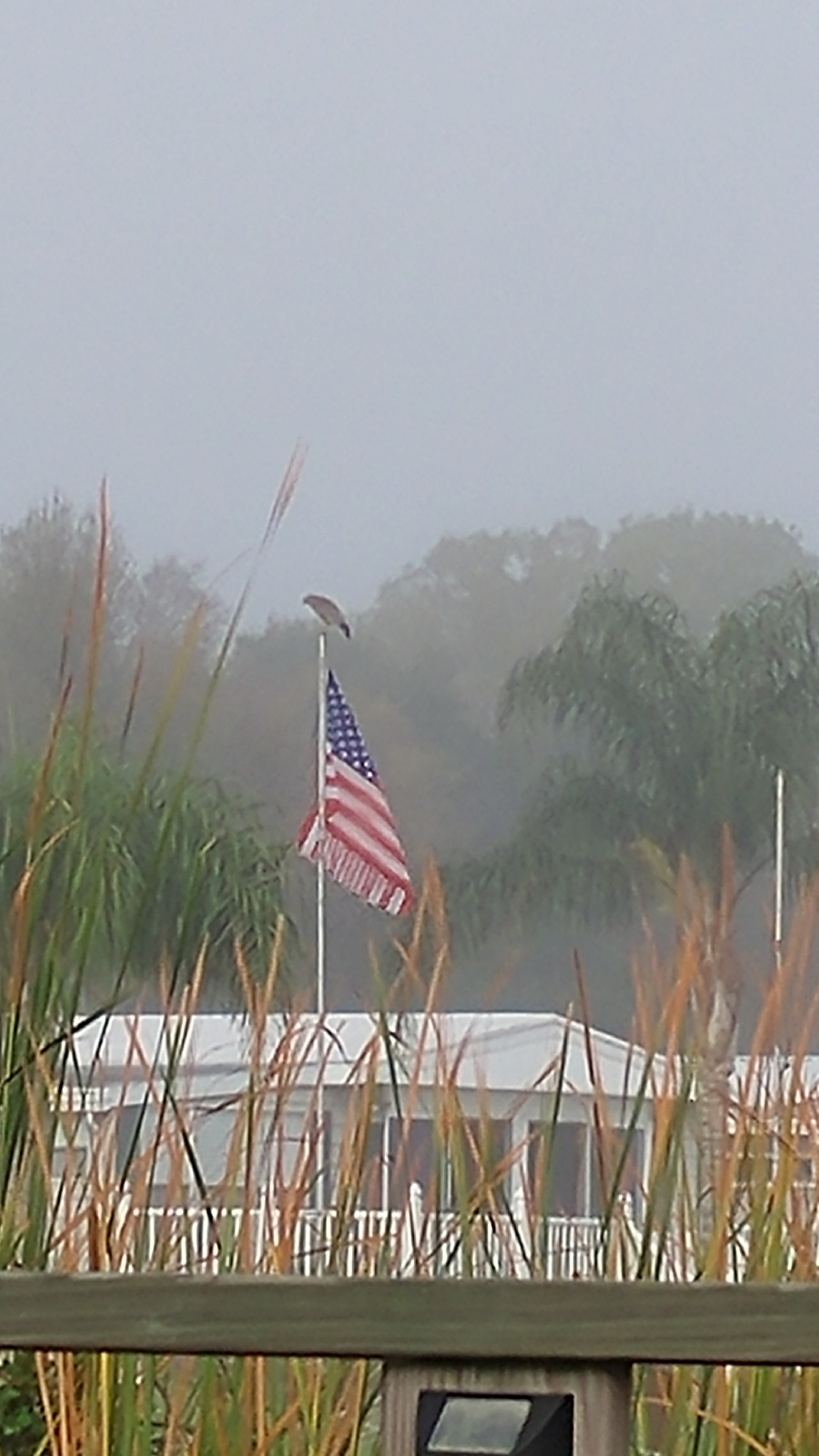 Hawk just hanging about for a photo op.
Posted by Gypsy Jane at 11:36 PM No comments:

Another eagle pair. (The other flew off rather than pose) 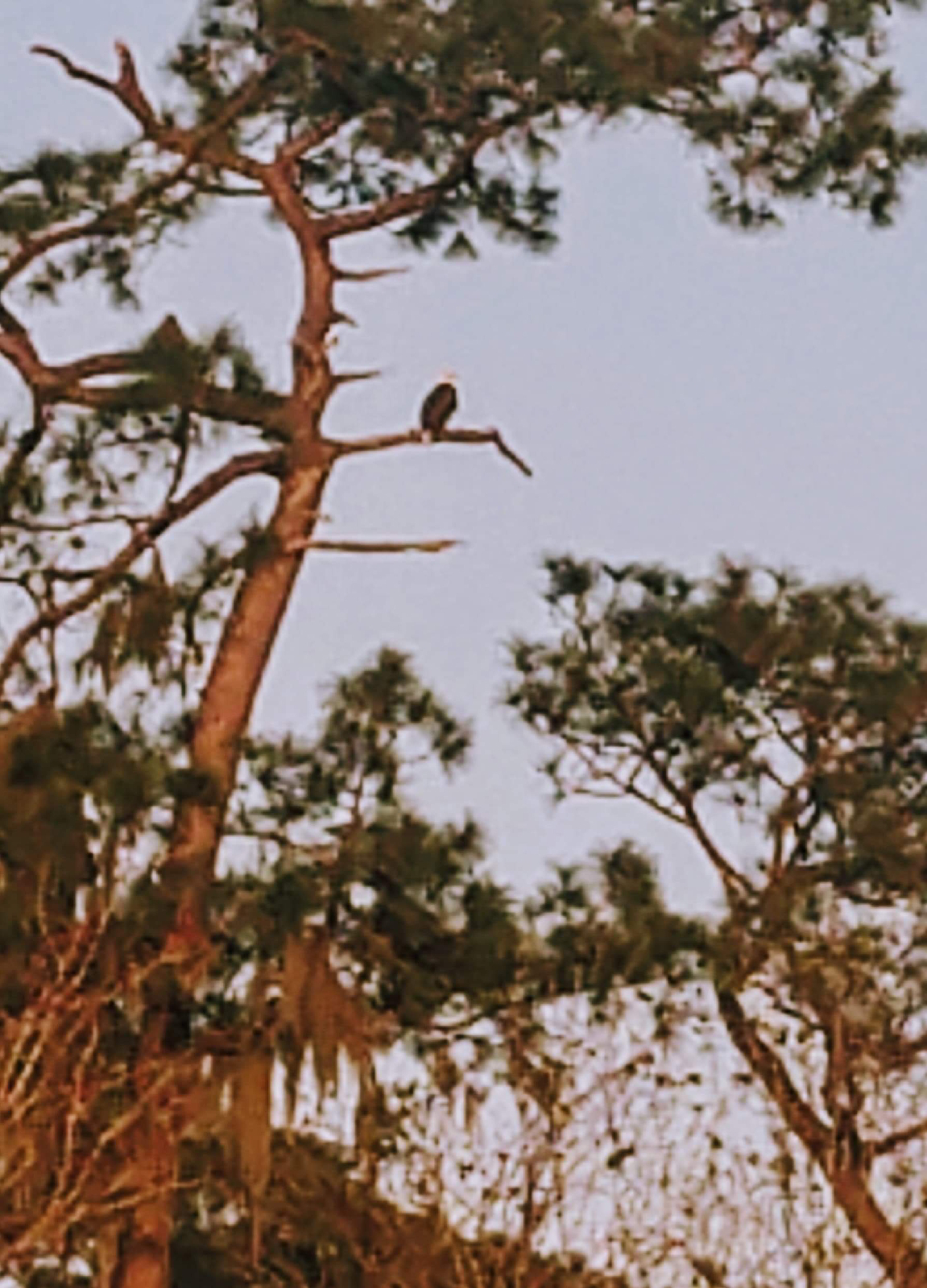 Posted by Gypsy Jane at 8:22 PM No comments:

One of the things we did last week was attend (and thoroughly enjoy) a performance of Porgi and Bess at the Metropolitan Opera.  Because you can go to local theater and see the Met's performances streamed live.  If you knew that, why didn't you tell me? I didn't know. Now I do.  If you also didn't know, now you do.
https://www.metopera.org/season/in-cinemas/
Posted by Gypsy Jane at 3:53 PM No comments: